Today, Xi’an is among one of the 13 China mega-cities receiving government attention to modernize and grow. Since 2005, the population of Xi’an prefecture has grown by about 1 million people, reaching 9 million.

The city center itself contains roughly 3.8 million people spread over a 319 square mile (826 km2) distance. The prefecture is about 10 times as large as the city with only twice the population, which makes it seem like this is a very densely populated area; however, compared to many other Asia cities, there is quite a bit more space between people. Xi’an is the capital city of China’s Shaanxi Province. 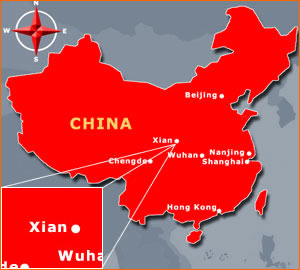 Living and teaching throughout many parts of China will create opportunities to learn about China’s vast history. However, not many cities compare to Xi’an, one of the oldest cities in China.

Boasting a 3,100 year-old history, it is, the original capital of what we now call China. Up until the first emperor of China unified the many different areas run by warlords, wars for land and power were rampant. The first emperor chose the area now known as Xi’an as the capital, where it remained for about 900 years.

Xi’an has four distinct seasons, with an average annual temperature of 13.5

F). The city has a moderate rainfall rate caused by frequent summer storms and a succession of overcast and rainy days in autumn. The best time to visit Xi’an is during the months of March through May. Early autumn (September and October) is also a nice time to visit Xi’an.

Requirements to Teach English in Xi’an

APPLY HERE TO TEACH IN XI’AN

Although the majority of our positions in Xi’An require teachers to meet the following, we do have some young learner positions for teachers under the age of 24. To be eligible for these positions, you must be at least 21 years of age and be willing to work with students between the ages of 2 and 5 years. These positions offer free flights to and from China, as well as free accommodations and a full on boarding session to help you prepare for your young learner’s classroom.

Because Xi’an is the first capital of imperial China and one of the first major cities, there are many historical sites that still bring tourists to the area. 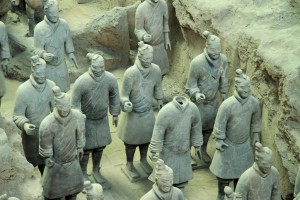 The Terracotta Army is one of the most well known collections of statues in the world. Built in the 3rd century BC, the statues were thought to be commissioned by the first emperor himself. The statues are meant to represent the armies built by the first emperor, who were used in life to unify the entire kingdom. The purpose of the statues, however, is thought to be protection of the emperor after his death.

The detail of each statue is impressive; while there were a limited number of molds for the faces, each statue was changed to be at least somewhat unique. Even more impressive is the detail of the army as a whole. The generals are distinguishable from the cavalry in size, action, and expression. The size of this army is so large that it can only be estimated. Found buried in three pits are roughly 8,000 soldiers, more than 500 horses pulling around 130 chariots, and 150 cavalry horses. Amongst the soldiers are all of the weapons of the day, including swords, battle-axes, spears, shields, and crossbows. Other nearby pits contain statues of the emperor’s court, including officials, musicians, and athletes.

The mausoleum of the first emperor was known since it was built, but only historical writings of the underground army were known. No one actually found the terracotta warriors until 1974, when a farmer stumbled upon them buried beneath his fields. In 1989, the site was listed as a World Heritage Site. Besides the famous terracotta army, still preserved in the city of Xi’an is the wall that surrounded the original city. While rebuilt during the Ming dynasty, the purpose is clear. Walls were common in early imperial China for two reasons. The most obvious was to keep out any potential invaders. However, the walls also served to keep people in.

At the most center of the city was either the emperor or the most important official; the closer people were to the center of the city, the more important they were in the eyes of the government. This usually required many more walls within walls, but today only the outer wall of Xi’an is still preserved. Anyone who left the most outer wall without authorization would not be let back in and one of the worst punishments a person could receive was to be evicted out of the city to spend his or her remaining days with the “barbarians” who lived outside of the wall. The Muslim Quarter (also known as Islamic Street), a neighborhood known for its unique culture and exquisite cuisine, exists within the city of Xi’an. Most people think of Buddhism or Daoism when they think of early China, but the country also has a very old Muslim tradition.

While never considered an “official” religion, there were many periods when Islam was practiced by millions. Most of the Muslim population came to Xi’an when the area was known for its trade in silk, as Xi’an was a major stop along the Silk Road. This trade route was active for hundreds of years, connecting China to the Middle East, Southeast Asia, and Europe.

Chinese silk was sought along this route since the early part of the Han dynasty (216 AD) and remained active for hundreds of years until the bubonic plague stopped travelers. This led to a merging of cultures and interaction between China and faraway lands. Today, the Muslim Quarter is still one of the best places to get souvenirs and discount items.

Many foods exist in the Muslim Quarter that can’t be found in any other part of China. Food stalls include meat kebabs, deserts, fried pancakes, cold noodles and breads with no equivalent English name-great for the traveler who loves taking a risk! This neighborhood also boasts China’s oldest mosque. In fact, today the Xi’an mosque is considered the center of Islam in China. Islam is still practiced by millions of indigenous Chinese people, the largest group being the Hui.

The mosque itself looks more like a traditional Chinese temple than the center for a “foreign” religion. Only the observer paying close attention will notice the Arabic letters engraved into different parts of the structures. Without this, one would never know that this group of structures is the center of Chinese Islam! 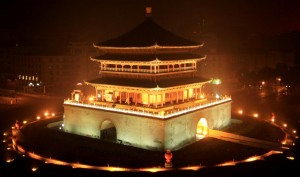 Xi’an also has many other remnants of its history. In the center of the city are two towers, known as the Bell and Drum towers, built to house important Tang dynasty relics. The Bell tower obviously is a building that houses bells, but these are no ordinary bells. The use of bells is essential in Buddhist rituals.

These Tang dynasty bells are considered sacred religious objects that come from the period where Buddhism’s most popular era in China. Equally important to Buddhist ceremonies are drums. Both of these building were built during the Ming dynasty to house these relics. For many years, the bells were struck at dawn to mark the beginning of the day, while the drums were beaten at dusk to mark the end of the day.

There are also two famous pagodas. The Giant Wild Goose Pagoda has collapsed and been rebuilt several times, but the character of the original (built in the 8th century) still remains. The Small Wild Goose Pagoda is similar in design and has also been victim to earthquakes in its 1,300-year history. Both of these pagoda’s were built to house Buddhist texts and statues acquired from India. The pagodas also served as centers for translation of acquired texts into Chinese.

Deciding where to teach English in Xi’an can be a difficult and stressful decision. There are a myriad of English teaching jobs available and they don’t always appear to be of the most reputable variety! That’s where we come in. We carefully screen every school we work with.

Our careful interview and screening process means that not everyone that applies for a job with Reach To Teach will be accepted, but if you are accepted, you can be sure that we will be looking out for you up until your departure for Xi’an and throughout your stay in this colorful Chinese city in the heart of China.

Teach English in Xi’an – Get ESL Job Advice from the Experts!

Today, Xi’an is a true mix of old and new. One can move through the city to see the sites on a modern subway system. Every type of food, from modern American to Middle Eastern can be found. For the teacher who wants to experience the vast history of China without giving up modern comforts, Xi’an is the perfect place to settle down.