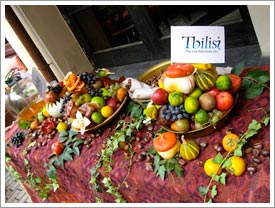 Georgian food includes a surprising number of unique and delicious dishes, and this should come as no surprise as Georgians are traditionally known for being as passionate about food as they are about their guests!

Georgians believe that receiving guests at home are a blessing from God. As such, any Georgian will tell you that it is truly an honor to have you as a guest. Furthermore, your presence acts as a blessing on their home. If you are lucky enough to be invited to a Georgian home for a meal, you are, in all likelihood, about to sample one of the greatest feasts of your life. The Georgian feast, known as a supra, is a lavish affair that includes a dozen or more traditional dishes and copious amounts of Georgian wine. Georgian people are incredibly hospitable, so expect to receive consistent prodding to eat as much as you can.

Even if you’re not attending a supra, you’ll find Georgian menus to be quite varied. The dishes listed below are just a sampling of various Georgian culinary options. Make sure you sample at least some of these fabulous dishes during your stay in Georgia.

Khinkali: A delicious Georgian take on dumplings, this ubiquitous meal is one of the most popular Georgian dishes. Khinkali can be found in a number of different forms. The most common is filled with meat and spices, but potatoes, mushrooms and cheese khinkali are also readily available.

Satsivi: This tasty ground walnut sauce isn’t quite a food in and of itself, but it’s delicious and served with a variety of Georgian dishes! It can be used as a dipping sauce for bread, or a sauce for fish and chicken dishes. The most popular version, baje, is made with a variety of herbs and spices.

Sulguni: This uniquely Georgian cheese is an acquired taste for most westerners. The flavor is quite strong with a sour and pungent aftertaste. Made through a pickling process using lactic bacteria, the cheese has a salty flavor and is often served in wedges cut from a flat disc.

Mtswadi: A BBQ fan’s delight, this dish includes all types of meat grilled to perfection using grape-vine wood. Mtsvadi is generally served with fresh onion slices, but fresh pomegranate juice can also be squeezed over the meat before serving. 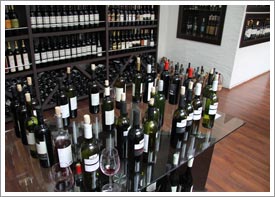 Georgians love to drink, and you will see them doing so at nearly every meal. Many of the taboos about drinking in the west don’t apply here and it’s not uncommon to observe Georgians drinking wine or chacha during a lunch break from work.

Any visit to Georgia should include a sampling of the following five local specialty drinks:

Georgian mineral water: Georgians are proud of their naturally carbonated mineral water, and it’s widely available at restaurants and corner stores throughout the country. The water has a unique salty taste, which can take some getting used to. It is also known as an excellent cure for a hangover, which you will surely need after sampling Georgian chacha and wine! The most popular brands of Georgian mineral water are Borjomi and Nabeghlavi.

Georgian Wine: Ghvino, Georgian wine, can be found at practically every dinner table in the country, and with over 500 varieties to choose from, it’s no wonder that the drink is so popular. There is a wine in Georgia for every taste! Georgians are extraordinarily proud of their wine, and a large number of wineries can be found throughout the countryside, particularly on its eastern end. There are a variety of different grapes used, but the most popular tend to be Saperavi and Rkatsiteli. Please consult the following link if you are interested in their wines. http://georgianwinesociety.co.uk/

Georgian Chacha: This Georgian version of moonshine can be found in its homebrew version in homes throughout the country. Any visit to a Georgian home will almost inevitably result in a sampling of the household’s take on this national drink. Chacha is made of grape pomace (grape residue left after making wine). It can also be produced from non-ripe or non-cultured grapes and, in some cases, figs, tangerines, oranges, or mulberries.

Lagidze: This tasty Georgian soda is akin to carbonized lemonade and it is similar in taste to 7-Up or Sprite. There are a number of other unique flavors that are based on natural syrups such as including tarragon, pear, grape or mulberries.

Georgian vodka: While not as ubiquitous as it is with their Russian neighbors to the north, vodka is very common in Georgia. This stiff drink can be found in any number of varieties and is widely available in stores and restaurants.

“Come for the Wine, Stay for the People.”