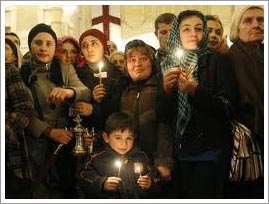 (January 7) Orthodox Christmas in Georgia is celebrated on 7 January. Traditionally, people dress up in special clothing and celebrate by going on Alilo, a mass walk in the streets to celebrate and congratulate each other.

(April 9) National Unity Day April 9th marks the commemoration of a tragedy known as the Tbilisi Massacre, when an anti-Soviet demonstration was dispersed by the Soviet Army, resulting in 20 deaths and hundreds of injured people.

(9 May) Victory against Fascism Day This day marks the capitulation of Nazi Germany to the Soviet Union in the Second World War. Georgia has officially recognized this day since May. 9, 1946.

(26 May) Independence Day The National Council of Georgia declared national independence on May 26, 1918. The statehood of Georgia was restored after 117 years (from 1801).

(28 August) Mariamoba (Day of the Virgin Mary) This special date commemorates the death of Mary, the mother of Jesus, and her resurrection. It is celebrated as the Feast of Dormition of the Mother of God. The feast is preceded by a two-week fast from red meat, poultry, meat products, dairy products, fish, oil, and wine.

(October 14) Svetitskhovloba This festival celebrates the first Christian church in Georgia, Svetitskhoveli Cathedral, which translates to “the Living Pillar Cathedral”. This Georgian Orthodox cathedral, located in the historical town of Mtskhet, Georgia, is located 20 kilometers northwest of Tbilisi. 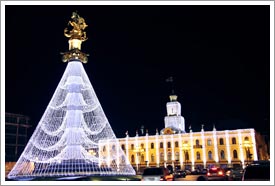 (November 23) Saint George’s Day, also known as Giorgoba, is celebrated in honor of Saint George, the patron saint of Georgia. It is a very special day for Georgians, who celebrate by eating a traditional Georgian supra and then attending church. Schools and universities are closed for the day.