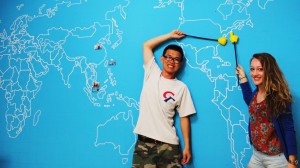 Take a stroll through a Ugandan market, sit in the lounge of a hostel in Bolivia, hang out at a bar in Shanghai, or pass through the halls of a school in Kathmandu, and soon enough your ears will be ringing with the question, “Where are you from?”

Without even thinking about it, these four words come stumbling out of my mouth in a variety of languages whenever I meet someone new.  They serve as my feeble attempt to make sense of a person with whom I initially have nothing in common with except the fact that we are both standing on the same square of land on Planet Earth.

We all come from somewhere, and regardless of time, race, culture, age, and socioeconomic status, there seems to be an inherent level of importance placed on knowing where someone is from within the first few moments of knowing him or her.  I think this is our way of developing a context around someone who is very much out of context.  To varying degrees of accuracy, most of us have an idea about what any given country is like, an idea that we then use to infer what a person who comes from that country must be like.

This can become problematic if the idea we have formed of a person’s place distorts the reality of who that person actually is.  As such, one of the biggest challenges of being a traveler is not only understanding and embracing your own national identity, but also coming to terms with the perception and context that may precede you as an individual as a result of that identity.  Being a “good traveler” also involves not allowing your preconceived notions of a place to interfere with getting to know new people as individuals shaped by, but not enslaved to, that cultural background.

Because of this natural human tendency to generalize, nationals of every country face stereotypes and misunderstandings.  Whether you are American or Chinese or French or German, you will eventually come across someone who has a strong and potentially misinformed opinion about your country’s politics, culture, food, laws, fashion, language, history, economics, media, or education system.  Their ideas may offend you and might feel the need to defend where you come from and who you are.

There is no “right” or “wrong” way to deal with the stereotypes or discrimination you may encounter, whether from other travelers or locals alike, but I think there are better ways to go about engaging with these people and directing your interaction with them from potentially hostile to productive and interesting.

As an American, I almost always meet someone who has a strong opinion about my country, and usually a few beers is all a group needs to go from harmless “where are you from?” introductions to dissecting United States politics, inevitably putting me in an uncomfortable position as the appointed American “ambassador” of the conversation.

Whether swinging in Brazilian hammocks, pounding beers in Hong Kong, or sipping milk tea in Mongolian gers, I have encountered these situations worldwide.  With lots of practice and patience, I have finally developed a strategy for handling difficult conversations and managing my role in fighting cultural stereotypes while traveling.

First of all, I know I should exhibit the traits in myself that I would like to see in others, so I always keep in mind that everyone from everywhere is an individual, not an all-encompassing poster-child of his or her country.  Whether they are the first Nigerian or the two hundredth Australian I’ve ever met, I try not to allow other Nigerians or Australians that I met before influence how I come to understand this new person.  I also realize that people are citizens of their governments, but that does not make them responsible or accountable for their country’s politics. Second, I have a rule to only engage in good-natured debates and do not allow myself to become defensive, which is the instinctive reaction.  I try to keep the conversation light-hearted and exploratory.  I ask questions to understand how the person in front of me has developed their opinion about where I come from and who I may be because of that.  I readily acknowledge where there is truth in their perception, and air on the side of political correctness when explaining where their ideas may have become misconstrued.

If I notice someone is unnecessarily combative and derogatory, I withdraw from the conversation, since it will only lead to arguments and perpetuating negative sentiments.  My goal isn’t too change everyone’s mind, because I know that’s an impossible and pointless task, so I’m happy to separate myself from people who cannot engage in mature or open conversation about their opinions.  This is definitely easier said than done.

Lastly, I try to be informed.  One of the areas of criticism about Americans, for example, is that we are not as aware of the “outside world” as other nationalities are.  I agree, and thus make a concerned effort to fight this perception by being well-informed about world history, staying abreast of current affairs in the US and around the world, and demonstrating an understanding of the country where I am traveling.  This technique is good for all travelers to use, since it makes us more credible in friendly debates, less susceptible to stereotyping, and altogether more interesting to hang out with.

With these simple techniques in mind, I have found that confronting the “where are you from?” question and the potentially sensitive nature of the conversations it can trigger has become far easier and more enjoyable, and has generally strengthened the quality of my friendships with people from all walks of life and all corners of the Earth.

What stereotypes have you faced while traveling because of where you come from?  How do you address conflict of ideas with other travelers or locals?

Guest Author: A former New York City management consultant turned legal nomad, Elaina Giolando writes about the intersection of career, life, and travel for today’s twenty-somethings. She currently works as an international media representative, traveling to a new country every 3 months to live and work. In her spare time, she focuses on providing her peers inspiration to proactively create rewarding and unconventional lifestyles. Her blog can be found at onevoiceinthebigcity.tumblr.com and you can follow her on Twitter @OneVoiceBlog.