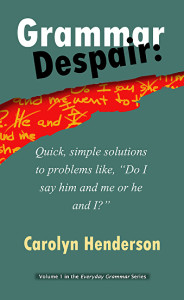 Writing, and writing well, is a challenge.

When students write in a second language — English, in this case — the challenges increase, but the same techniques that they use to write well in their first language apply, with a few modifications.

First and foremost, to write well, one reads well — good books, preferably, written well themselves, in order to get a sense and grasp of tone and cadence. For a second language learner of intermediate ability, higher-level chapter books written for teens and young adults are a good start — C.S. Lewis’ Chronicles of Narnia come to mind as engaging stories with a delightful (albeit British) tone; Laura Ingalls Wilder’s Little House series as well provides a good story with good writing.

While it is tempting to pull out contemporary vampire and zombie fiction, these are not necessarily well written; my own glancing at some of this fare leaves me irritable and frustrated, encountering a series of simplistic subject/verb, subject verb sentences over and over that always make me weep for the literacy of our upcoming English-writing generation.

But reading is the first, crucial step — lots and lots of reading, rounding out literature with magazine articles, newspapers, ads, pop culture publications like People Magazine, cookbooks, good blogs (like mine — www.thiswomanwrites.areavoices.com) and such to absorb what a sentence written in English — American English, British English, Canadian English — looks like.

From that point, one embarks upon writing, and it’s important to remember that one’s writing ability — especially when learning a second language — lags behind one’s reading ability, but that’s okay, because the more you do something, the better you get at it.

I homeschooled my children — all now adults — and our writing program consisted of just that — writing, from a half-hour to an hour daily, with the topic chosen by the child himself. Some days and some children focused on writing about animals; other times there were treatises on that day’s science or history lesson; once a week there would be a book report; many times I read through short stories featuring the adventures, and conversations, of our rotating supply of farm cats. (I especially enjoyed these conversation stories, since they allowed me to teach the children about quotation marks, and how to punctuate with them.)

My part as instructor was to read these essays and gently correct — because too much correction, all at once, is overwhelming for the writer. So I would focus on a few misspellings out of many, a run-on sentence here and there, the inevitable mixing up of they’re/there/their, and ensure that the mechanics of those few chosen corrections were understood and practiced.

But most important to me was the content of the works and how that content was presented — was the subject interesting? Did the writer use an appropriate tone — formal, informal, something in between? Were the writer’s points clear and understandable? These elements are not as concrete as a correctly placed comma or a proper agreement between the subject and the verb, but they are ultimately what makes a person a good writer, or not.

In teaching writing in a second language, an added, and crucial element is whether the English sounds like “real” English; as a native English speaker, I quickly spy that the message from my phone company is from a non-native speaker by little cues — too much verbiage, for instance, along the lines of,

See also  You Lost Me: Five Tips for Checking Comprehension

“I am so happy to be able to answer your question, Mrs. Henderson, and I thank you for the opportunity to answer these questions,” as opposed to,

“Thank you for writing us, and I will do my best to answer your question.”

This article was written by Carolyn Henderson, a professional writer who has published Grammar Despair — Quick, simple solutions to problems like, “Do I say him and me or he and I?” designed for both native and non-native English speakers, and written in a colloquial American tone. It is available in paperback for $8.99 or digital Kindle for $5.99 at Amazon.com.