Taiwan’s cultural differences are something that most expats make note of when living in Taiwan, some of them are very obvious, others not so much. One of the most important parts about traveling abroad is keeping an open mind. You will often encounter people with beliefs that differ from your own. 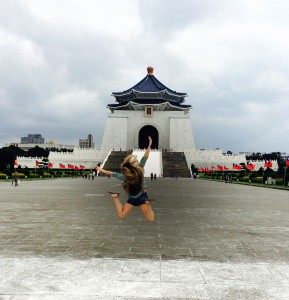 Being able to understand another person’s perspective creates opportunities for cross-cultural learning. First and foremost, however, before you travel abroad, you should ascertain if a certain culture is compatible with your own thoughts and beliefs.

I remember sitting in a lecture hall (during my days in university) listening to a discussion about culture shock and the importance of respecting other cultures. It was 2012 and the lecture was hosted by the travel abroad department of my university. It was a mandatory lecture for everyone studying abroad that year and I was headed to Taiwan for the first time.

For someone who comes from an ethnic background (Belarusian) and has always surrounded himself with a diverse array of friends, the lecture seemed redundant. After living in Asia and visiting numerous other countries, I had grown accustomed to shifting my perspective to relate with foreign places and people.

The other day a fellow expat teacher reminded me that not all travelers have such familiarity with different cultures. The teacher had been a bit dissatisfied with his time in Taiwan, Taipei specifically.

He was dissatisfied with the fast pace of life in the city, the lack of physical interaction between people e.g. hugging or one of those handshakes where the two people do that side hug (is there a name for that?), deficiency of people he readily could get along with, and the work environment.

See also  Teaching in Korea: The Easiest Transition Of Your Life

This teacher grew up in a culture where meeting a stranger and talking for a bit led to a hug and a possible invitation to their home for dinner. A culture where waving hi to random people on the street happened more often than not.

It was this pre-existing notion of social interactions that this teacher brought to Taipei and the teacher was beginning to realize they could not live the lifestyle they expected.

It is with this that I will detail a few of the possible cultural differences Western teachers may encounter when coming to Taiwan. I also want to avoid sweeping generalizations about entire countries. Of course, everyone is different and some people will react differently in certain situations than others.

Taiwanese people tend to lean towards a more conservative idea of physical interaction than your average American or European. While a hug or kisses on the cheek may be normal in American or European culture, Taiwan has a different idea of what these actions mean.

A hug, let alone a kiss, is seen as quite an intimate interaction to be shared between very close friends or partners. While most people in Taiwan will not refuse your request for a hug (because of their incredibly friendly and welcoming nature), they may not feel 100% comfortable. A Taiwanese friend told me if you hug someone once you’re close friends and hug someone twice in a row means you like them on another level.

As far as I’ve seen, high-fives are limited to a literal high-five. Hold your hand up, elbow bent, and slap the other person’s open palm. The elaborate handshakes we make up in the States are not as pervasive in Taiwan.

If someone offers you food in Taiwan, EAT IT. You don’t like it? It doesn’t matter, eat it. If you are offered food and decline the offer without trying it, or taking only a couple bites and returning the dish, it can be seen as very impolite.

I once accepted a bowl of Sesame Oil Chicken, knowing I despise the dish, and only ate a portion. When I returned the dish it was received with a scowl of the likes I will never forget. Only reject a dish if you have a darn good reason.

Additionally, sticking your chopsticks upright in any bowl of food is also seen as rude. Chopsticks in this fashion represent the candles lit at funerals, i.e. it is associated with death, a big no-no.

Coming from America, I’ve trained myself to be up-to-date on the latest happenings in the sports world, otherwise, I’m left with nothing to say in a majority of conversations.

While Taiwanese people have some major sports they follow, they are nowhere close to the same intensity as fans in the States. Most children in the States grow up playing some sort of sport; most children in Taiwan grow up studying countless hours a day.

This topic led to someone I know saying “No wonder Taiwanese kids are soft.” This one-sided analysis of Taiwanese people definitely irked me a bit and leads me to my next topic….

Taiwanese students can take a verbal beating like it’s nobody’s business – then turn around and ace their next assignment. Anyone who sees this kind of tenacity and perseverance in a student would say they are anything but soft.

Taiwanese people value education over most other pursuits. As students, they spend hours at school, then when school finishes they go to cram school, then when that’s done they’ll spend more time at home doing school work or other extracurriculars.

This one is more about being an expat in any country but relates back to the teacher’s concerns. You are going to meet a cornucopia of people from a variety of different places around the world. Each person has their own reasons for traveling and teaching abroad. You are going to meet some people you get along well with and others you don’t; however, still keep an open mind about the people you meet while traveling.