Summer sunshine has finally arrived in Korea, which gives us residents an exact 2 week window before the heat and humidity begin to crush our spirits. If there’s anything that’s true about Korea, it’s that the seasons are extreme. Before I retire to my apartment for the next 2 months where I will create a dark, cool bat cave in which to hide out from the oppressive weather, I’ll give you some helpful tips on which Korean summertime icy treats will help cool you off with their tasty flavors. 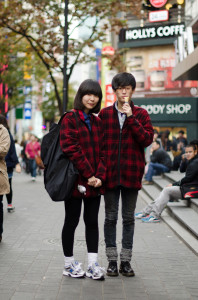 A nostalgic staple in any Korean’s childhood, patbingsu is a favorite amongst young and old alike. This frozen snack was originally made with only sweetened red beans and ice shavings, but now is created in a variety of ways with different toppings. Depending on the café or ice cream shop you frequent, you can find flavors like mango with sweet condensed milk and a scoop of cream to top it off. The strangest bowl of patbingsu I’ve had in Korea came with frosted flakes and banana slices over a bowl of chocolate syrup and ice shavings. It tasted like a sinful, adult version of kids’ breakfast cereal.

My personal favorite ice cream in Korea comes in a strange plastic tube and is terribly uncomfortable to eat in public. It’s almost like eating from an awkward baby bottle because you have to cut the perforated tip off and drink from it. Actually, I only enjoy this delicious snack in the comfort and privacy of my own home. The variety of flavors that you can find in these strange, plastic guarded ice cream tubes is too many to count. I’m actually not even sure I’ve seen every flavor in the frozen section of stores, but of the few I have found and tasted the banana flavor is by far the best. The best way to eat this ice cream is to let it sit and melt a bit until it gets slightly slushy, then drink up the delicious treat. If you try to eat it while it’s still frozen, you’ll end up sucking all the flavoring out and will be left with a tube full of plain ice after. It’s not as delicious as my way of eating it, trust me.

This cold treat is a spin-off of the popular fish shaped, red bean filled pastries sold by street vendors. The pastry is best enjoyed during the cold winter months because the red bean filling is piping hot, but if you’re still in the mood for a tasty red bean treat, you can always enjoy the ice cream version! The cute little fish in ice cream form has a delicious middle layer of sweet cream and two thin layers of pat (or sweetened red bean) sandwiching it.

Maybe this treat won’t be everyone’s cup of tea – because it certainly isn’t mine. I personally think some flavors and foods just weren’t created to be eaten as a delicious sweet treat. Take for instance, sweet corn. Korea’s love affair with the golden little nuggets is understandable. I myself love a good cup of corn when I’m indulging in Texas BBQ, but Korea takes their love affair too far. They like to enjoy their sweet corn as a dessert! I, myself, can’t get behind the idea of a vegetable for dessert. I’m nearly positive it’s just a terrible prank parents started back in the day to get their kids to eat more vegetables, but then everyone forgot to yell “just kidding!” and that’s why sweet corn as a dessert is still in existence. Whatever evil reason this treat exists, it’s still popular in Korea and should be tried at least once if only to claim you ate sweet corn ice cream in Korea.

5. Seolleim – Ice Cream In A Pouch

This newcomer on the block has only been around since 2003, but has quickly become a favorite in Korea because of its easy to use pouch and no-drip nozzle. Imagine a Capri Sun filled with ice cream, and then imagine it with an awesome little screw cap that you can open and close as you wish. Now, you have an idea of what these awesome ice cream in a pouch treats are like. At the moment, they only come in three flavors: milk shake, coffee shake, and cookies ‘n’ cream. However, the lack of variety doesn’t seem to bother anyone in Korea. These three flavors are more than enough to keep you cool and your sweet tooth satisfied all summer long.

If you’re currently living in Korea, what kind of ice creams or treats do you like best to beat the summer heat? Tell us in a comment below! We’d love to know what treats to try next!