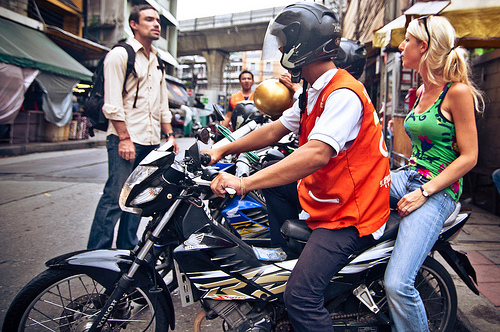 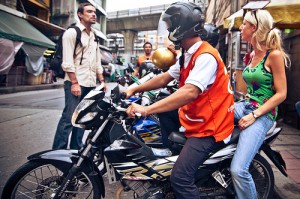 This is Andrea Emerson, Bangkok based expat English teacher. I have spent over a year teaching English to hormone riddled teenagers, attempting to photograph fire balloons and generally not going on any dates, and now I would like to impart some of my wisdom from this crazy adventure. If you’d like to learn more about teaching in Thailand, Bangkok specifically, or even if you just want to know where on earth to buy women’s essentials in this land that doesn’t really ‘do’ tampons, you’ve come to the right place.

I recently resigned from my current position. More on that later, I’m not leaving Bangkok. My students were distraught, as I thought they might be. But the person who was most distraught was my regular motosai driver. I did not expect his reaction to be more charged than my 7th graders. In fact, he asked where my new school is so he could drive by and ‘see how it is,’ and has offered to help me find a new apartment. I’m not relying on him to help me find my new apartment, I’m asking female Thai friends to help with that. But my point illustrates the kindness of motosai taxi drivers of Bangkok.

My driver talked about how maybe someday I would teach his son and daughter. He drove me across town and accepted payment later when he saw a police shake down set up. He smiles and waves when I walk by, and gives advice on bus routes, ATMs, everything within his English ability and my limited Thai.

See also  I Chose The Road Most Traveled

I’ve learned to trust motosai drivers more than taxi drivers. While I’ve been molested by a taxi driver (ladies it’s not uncommon, watch yourself), I’ve rarely had a bad motosai driver. The various ‘wins’ (motosai gangs, but, not violent gangs, more like, packs of friends) near where I live and hang out know my routes. I don’t have to haggle on my price any more. They smile and wave when they see me. Most of them have a passenger’s helmet on hand for me.

Having never ridden a motorcycle before leaving North America, I never imagined it would ever become part of my daily life. But now I have to say it’s one of my favorite parts of living in this city. Especially being able to hire one to get home for a few dollars.

If you want to rent or drive your own, I highly recommend learning outside of Bangkok, and not on the hilly islands. And watch out for rental schemes on the islands. To the north outside Bangkok, renting a motorcycle to learn was a great thing to do. With a little more practice outside of the madness of Bangkok, perhaps I’ll be driving my own. But if you need to get somewhere or know what’s going on, ask a motosai driver.