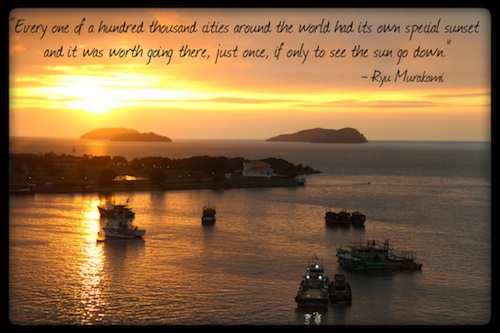 First things first! Where did you see your most memorable sunset?

My most memorable sunset was the very first sunset that my husband and I saw together. That was back in 2005, before we were husband and wife. We had just arrived on Koh Phanghan, Thailand and checked in to our private bungalow overlooking Haad Rin Beach (which literally translates in Thai to Sunset Beach). Just as we had dropped our bags off and stepped out onto our balcony, we were rewarded with the most magnificent sunset I’ve ever seen. The sky was washed in brilliant oranges and yellows. That was the first of many sunsets together, but it remains to this day one of my favorite moments together.

This apt travel quote was written by Japanese novelist and filmmaker Ryū Murakami. Although Ryū shares the same last name with his contemporary Haruki Murakami, the two writers are not related, but they do share a love for American pop culture.

The above-mentioned quote can be found in his novel Coin Locker Babies, which was written in 1980. The story is about two boys who are abandoned in their infancy in coin lockers in a Tokyo train station during the summer of 1972. The boys become wards of Cherryfield Orphanage in Yokohama, Japan. Eventually, they are adopted by a couple who live on the island of Kyushu, and from there, the strange odyssey of their lives commences. At the age of 16, both boys leave for Tokyo to find the woman who rejected them at birth. They end up in Toxitown, a diseased urban wasteland in Tokyo, where they embark on a madhouse adventure that takes them through the eerie landscape of late-twentieth century Japan.

See also  Being Home After Travel is Hard
Please share!