Five Mistakes To Avoid On Your First Day Of Class

Whether you are a brand new teacher or have been in front of the classroom for years, the first day of a new class is crucial.  It’s important to put in some thought and planning to start a new class off on the right foot.

Avoid these five mistakes not to make on your first day of class and your school year will be off to a great start.

Not Establishing Rules and Routines in Advance 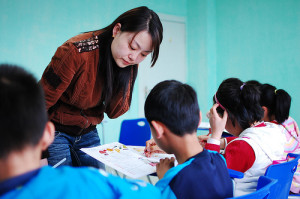 If you put in the work to clearly establish rules and classroom routines on the first day, then classroom management will be a breeze through the rest of the year.  It takes a little planning ahead, though, and a lot of first time teacher end up stepping into their first day of class without a clear plan.

Decide what your rules are before you even set foot in the classroom. You can make a poster with the rules on them, or just write them on the board, or just explain them to the students.  If students are at a very beginner level, have someone who speaks their native language translate for them.  It doesn’t matter so much how you present the rules to the students, what matters is that you communicate to them very clearly what is acceptable and what isn’t.

Another thing to set up in advance is what will happen if they break the rules.  Don’t put yourself in a position where you have to make up arbitrary punishments on the spot.  If a student starts speaking in their native language during an English lesson, they need to know exactly what the consequences will be.[contextly_sidebar id=”Ii7Mdfqndgntn8xC01OFduSPIF9WQJpa”]

Classroom routines are a big part of keeping a class running smoothly, too.  You might want to designate an area where they put their coats and backpacks at the beginning of each class, have some activities or books that they can work on when they first come in and are waiting for classmates to arrive and get settled.

However you set it up, after the first day, your students should know without having to be told, exactly what to do when they get to class, what materials they need to have at their desks with them, and roughly what to expect throughout the class.

Not Sticking to the Rules

Just because you’ve made it clear what the rules are doesn’t mean your students are all actually going to follow them.  The first day of class is incredibly important because when your students don’t know you, they are going to push the boundaries and try to figure out what they can get away with.

Once they decide what kind of teacher you are – a push-over, distracted, fun, nervous, in-control, mean, – it sets the tone for the rest of class.  That is very, very hard to change once it’s established.  It’s better, at the beginning, to err on the side of being a little too strict.  It’s much easier to give some leeway later than it is to reign in the chaos that can come from being too lenient.

We all want our students to like us. But, especially on the first day of class, remember that you’re not there to be a friend, but to be a teacher who does what’s best for the class and for each student’s long-term progress.  This will probably mean upsetting a couple of students on the first day – they’ll break the rules to test you, you’ll carry out the punishment that you set up earlier, they’ll complain or get upset.

They may not like you in that moment, but if you stick to the rules, you’ll quickly establish a classroom where you and the students have the safety and structure to have fun and learn.

See also  An Open Letter To New Bloggers In Korea: Don’t Put Down Your Pen

Letting Students Fade into the Background

Every class has quiet students.  Some are shy, some just don’t want to participate or get involved.  On the flip side, every class has those students who never seem to be quiet, or are bouncing out of their seat to give the answer.  It’s very, very easy to only call on those students who are actively engaged and participating and are ready and waiting with the right answer.

Make sure that you call on everyone and give everyone in class a chance to speak or participate, especially on the first day.  This not only establishes to the students that they are going to be expected to pay attention and participate, but it also gives you a chance to get to know where they are really at – has that student been staring at his desk all class because he doesn’t understand, because he’s too shy to speak up, or because he’s bored and falling asleep?

It’s important that you find out, and the only way to do that is by giving everyone a chance to participate.

Letting Students Pick Their Own Seats

Just. Say.  No.  It seems like a minor point, but letting students sit next to their friends is setting yourself up for a difficult time.

Work with your teaching assistant or someone who knows the kids to set up a seating chart. Either write name tags or put the chart on the board so that students know exactly where they are going to sit.  Unless there is a legitimate reason – for example, a kid with poor eyesight who needs to sit in the front row – don’t let them argue, don’t let them trade, don’t let them try to talk you into moving them.

Later in the school year, you can change seats.  Depending on the class, you might use it as a reward – if they show you they can follow the rules for the first few weeks, you’ll let them sit by their friends.  But on the first day, with a group of students that you have never met before, letting them sit wherever they want is just courting headaches, and will make it very difficult to assign seats later when students are used to sitting wherever they want

Yes, this seems like a contradiction with the above points about sticking to your guns and being clear and consistent about the rules.  Yes, you absolutely need to keep to a hard line when it comes to establishing rules and making sure students know you will stand behind them. But you don’t need to make them think you are a mean teacher or that they’re never going to have any fun in class.

It’s not always easy to find that balance, especially on the first day when you are trying to make sure that students know where the line is. That’s why it’s so important to do something fun on the first day of class.  Even if all you have time for is a five-minute game, make sure you squeeze it in.

You want the kids to be looking forward to coming to English class, and to be excited about learning.  The whole point of setting up rules and routines is so that the class runs smoothly and has the structure your students need to learn, have fun, be creative, and be themselves.  So make sure that you do something fun to communicate that to them, and don’t take the first day of class too seriously.