8 Ways To Spot A Newbie In Taiwan

8 Ways To Spot A Newbie In Taiwan

Before we get to the meat of this article, let’s first take the time to discuss the creature at hand: the newbie in Taiwan. Yes, sadly we were all in this position at one time. (I often find myself still feeling like the new kid on the block even a year in.) 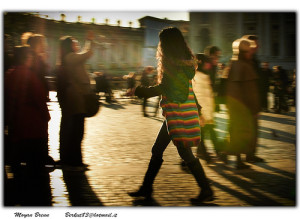 It’s funny thinking back on all the little social faux pas I made on a daily basis during my first few weeks in Taipei, and I certainly wish someone had been able to spot me in a crowd and lend a helping hand, especially when I was lost in the city.

If you happen to notice an expat displaying any of the following signs, that expat is a newbie. Be a kind veteran and walk over to assist them, will you? (For grammar nitpickers, this is written speaking of the newbies as a collective. As such, I’ll use plural pronouns. So calm down, ok?)

1. They’re caught in the rain

If you spot any foreigners caught in the rain looking like frightened soaked kittens, you can bet that they’re newbies. Those who have been here long enough know better than to leave the house without an umbrella stashed somewhere within arm’s reach.

I, myself, carry a tiny little one at all times in my purse. And if we ever do get caught in the rain without protection, we know exactly where to run to, 7/11. Newbies stand and panic while veterans make a beeline to the umbrella stands at convenience stores.

2. They don’t know their teas

Tea in Taiwan is a big deal and traditional tea ceremonies are so much fun because visitors get to learn all about the beautiful practice of brewing, smelling, and tasting tea. A stop to a traditional teashop is definitely x-ed off of all veterans’ bucket lists.

So if you ever hear an expat claim they “don’t like tea” or worse they believe “all teas are the same,” they’ve just showed you their metaphorical newbie card. I know how angry you must be when you hear this, but forgive them for they know not what they do.

Simply offer to take them to a teashop and show them the beauty of the tradition. My personal favorite spot to take friends is Wisteria Tea House.

3. They think they have the right of way as a pedestrian

This form of thinking runs rampant in the states, and with good reason I suppose because no one wants to get sued for barely touching a pedestrian with even the antenna of their car.

Pedestrians in the states are normally cocky little fluffheads who think they own the street because they can sue anyone in a car who comes too close. This form of thinking is stupid in the states (seriously, you’re taking on a car?!) and deadly in Taiwan.

Unless you want to watch your new friend end up a road pancake in Taipei, teach them caution when walking the streets in Taiwan.

4. They cringe when they see a stand for pig’s blood

Maybe not all new expats will exhibit this sign, especially not those who are accustomed to eating animal blood, but those who have never seen – much less smelt – boiling vats of animal blood might turn a nice shade of green when they see it for the first time.

Simply assure this newbie that pig’s blood cakes are delicious, and offer to buy them the tasty treat. What a kind veteran you are!

5. They give inappropriate gifts

If you see a foreigner gift a Taiwanese person with a clock, shoes, or white flowers, the poor sucker has not just made the gift receiver uncomfortable, but he’s also clearly stated his status as a newbie in Taiwan.

6. They stick chopsticks into their food

This rings true for most countries in Asia actually. So if you see an expat do this, they’re completely new to eastern cultures. This person above all others needs a guided hand and kind veteran friend the most.

In an effort to keep the MRT as beautiful and spotless as ever, discreetly mention the rules to this person before a guard catches them sipping their Starbucks and blows his whistle in their ear rendering them deaf for the rest of their days in Taiwan.

Anyone who is brave enough to taste the Taiwanese cheap liquor (the bottle with the little rooster on it) is actually just a newcomer in Taiwan. Anyone who’s put his or her time in on the island knows to stay far away from that evil little rooster and the bottle of poison.