If you’re a tea drinker, you’ve probably heard of Taiwan’s teas.  Taiwan’s Wulong (or Oolong), also called Formosa Wulong, are considered the best Wulong teas in the world, and are highly sought-after exports. 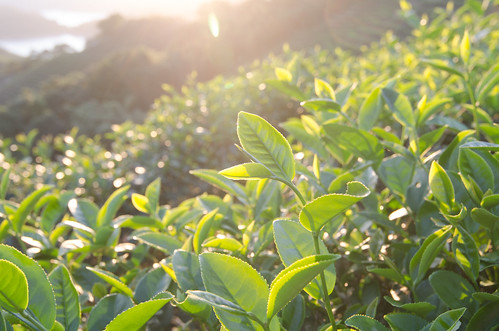 Taiwan itself has a big taste for tea. Much of the tea produced is consumed on the island, and is an important part of local culture.  Finding out more about Taiwan’s tea plantations – and maybe even planning a visit –  is a great way to get a deeper understanding of Taiwan’s tea culture.

So what makes Taiwan’s tea plantations so special?  For one thing, the climate is perfect for growing tea.  High mountains provide the cool temperatures needed.  Combine that with high humidity and fertile soil, and the tea leaves have the exact conditions they need to grow slowly and develop their flavor.

The flavor is further enhanced by the complex and well-honed drying process. Going from freshly picked tea leaves to dried leaves ready for consumption involves an elaborate process with many things depending entirely on the judgement of the tea producer.   Tea plantations in Taiwan are primarily small, local operations, often remaining in the same family for a century or more. This means that many of the tea producers have been building their knowledge and honing their skills since childhood.  Those who have accumulated a lifetime of knowledge are rightly called “Tea Masters.”

Taiwan is relatively new to the tea scene, having only produced tea for the last two centuries or so.  It might seem like Taiwan would have a hard time competing with the thousands of years of tea production in neighboring China.  However, capitalism and free market have fueled healthy competition and have pushed constant  innovation and improvement in tea growth and production. Taiwan’s tea competitions play an important role in keeping tea production fresh and innovative, too.  These competitions can draw thousands of entries, often from around the world.  Winning teas are usually auctioned off, and can go for upwards of US$25,000 for about 600 grams of tea.

With how mountainous Taiwan is, and how important tea growing is to the country’s culture and economy, it should come as no surprise that tea plantations can be found in nearly every region of the island.  Much like fine wines, teas have distinct flavors and tones depending on the region, and even the specific plantation, that they come from.  Whether you are just passing through the region and want to check out the local tea plantations, or whether you are taking a guided tour with access to the processing areas and tea samples, here are the main regions that you’ll want to check out to get a full idea of Taiwan’s tea plantations.

Located just on the outskirts of Taipei, the Maokong tea plantations are the easiest to reach from the city.  The Maokong gondola whisks you right up the mountain, to one of the most important areas in northern Taiwan for tea growing and tea culture. For your first introduction to tea ceremonies, and to get a glimpse of what a tea plantation is like, Maokong is the place to go.

As the largest tea plantation in Northern Taiwan, Bagua gives you a sense of the scale of tea production on the island. It also gives you views of one of the most picturesque and beautiful tea plantations on the island.  Set in misty mountains and rolling hills, it’s a place to go to enjoy the views as much as the tea.

This is a perfect example of a tea plantation that has been carefully run and production honed at the hands of a life-long tea-maker, who has fully earned the title of tea Master.  The plantation produces a highly sought-after type of tea called Oriental Beauty Wulong, also known as the champagne of Wulong teas.

See also  How to Regain Control of a Difficult ESL Class

Alishan is a mountainous region of Taiwan not too far from Chiayi and it is famous for producing exceptional high mountain Wulong teas.  The high humidity, low temperatures, and influx of fresh spring water, all create perfect conditions for slow-growing, soft, and flavorful tea leaves.  Within Alishan, there are a number of distinct  tea growing regions, including Shi Zuo, which produces the unique Wu Long Wei type of tea, and Zhong Shu Hu, which is known for teas with a fruity edge to them.  High mountain teas, like the kind grown in Alishan, can only be harvested three times a year, instead of six.  Leaves tend to be more flavorful, and the teas produced from them are highly valued.

Although Taiwan is most famous for its Wulong teas, the island produces teas of all varieties.  Located on the Wuhe Plateau in Hualien County (home to the infamous Toroko Gorge), a number of tea farms produce all varieties, including a unique type of tea called Honey Peach Black Tea.  When farmers here tried organic tea growing methods, they found that their tea leaves were being eaten by cicadas.  Instead of ruining the tea leaves, though, the cicadas left a lingering honey flavor to the leaves, creating a new type of tea that has gone on to win numerous tea competitions.

Taiwan may be a small island, but it’s home to some world-class teas.  Whether you plan to take a tour of some of Taiwan’s tea plantations, participate in a tea ceremony, or even get some hands-on experience picking and processing tea leaves, make sure that you take time to appreciate this important part of Taiwan’s culture.