You’ve done it! You’ve sent in an application to use Reach To Teach as your recruiter and you passed the initial interview. Congrats! Now comes the really difficult part, deciding in which city you’d like to apply to teach. Should you choose the bright lights and fast paced streets of Seoul? Or should you opt for a quieter, smaller city? Decisions, decisions. How should you choose? There’s always the trusted method of a good old fashioned coin toss to decide your fate, but I feel that route is a bit too romantic and overdone. 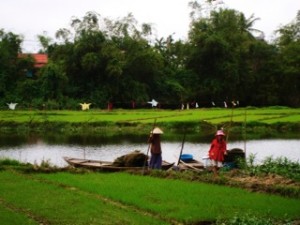 You’re not really going to allow a rusted quarter to determine your fate for the next year, are you? I didn’t think so. The South Korean city you choose to reside in for the year will dictate your experience abroad more than you think. It could affect which people you meet or miss, the chance encounters you’ll have, and perhaps even potential love interests you might find in the city you choose.

With that in mind, go ahead and put down your quarter and read through this very grown up list of pros and cons I made for you. I’ve taken the liberty of splitting this list into two articles, 5 pros and 5 cons, so you have time to mull over your choices before making an educated decision.

Let’s start with the cons and end with the pros, shall we? It’s much more inspiring to end on a good note.

1. Old fashioned thinking can be prevalent in smaller cities

Smaller cities tend to house older generations of Koreans. In my personal experience these older Koreans have one of two reactions to foreigners. They either become genuinely excited about meeting someone from across the globe or lash out at the poor unsuspecting foreigner in angry Korean words, wild hand gestures, or the terrifying side eye. Although there are older generation Koreans throughout all of South Korea, I’ve come to find that I’ve only ever met bitter older Koreans in smaller cities. I’ve never been scolded by an older Korean in bigger cities like Seoul, but in my day to day life in my sweet, small city, I’ve gotten scolded more times than I can count. Come to think of it, just this morning a cab driver made me blush when he yelled at the waygook (foreigner) in his cab for only having a credit card instead of cash with which to pay. Oops. I’m sorry. Mental note: carry cash at all times because cab drivers are grumpy old men sometimes.

2. Seoul never sleeps, but a small city might have an early bed time

If your idea of the perfect life abroad is partying, drinking, and dancing until the sun comes up, then a small city might not exactly be the best fit for you. While the bright lights of Seoul shine well past the witching hour, smaller cities have already tucked themselves into bed and are peacefully dreaming. The small city I live in tends to shut down around 2 am on the weekends, and they mean business when they decide it’s closing time. I’ve actually learned this lesson the hard way. One regretful night, I got locked inside a bank when I popped in right at 2 am and the automatic locks dead bolted me inside the room Read the full story here. After a few tears were shed and I was finally freed with the help of a police officer, I vowed to always keep an eye on the time when I stroll into the bank for a quick withdraw.

3. Getting around the city might take more time and effort

Maybe you’re from a big city with great public transportation. You have all the subway lines memorized by heart. You could fall asleep on your commute to work and your body wakes you up right on time to catch your exit. Be warned that some smaller cities, mine included, don’t have subway transportation. While the bus systems run efficiently and on time, it’s no where near as convenient as to what you’re used. It might sound like something you can live without now, but do keep in mind this change won’t be for just a short time. It’s an entire year of slower transportation. I didn’t give it much thought when I moved out here, and after 5 months of a slow bus commute twice a day, I’ve never missed the convenience of my old Dodge Neon as much in my life. Trust me, think it over.

In Seoul, most public places have English signs, and a majority of public workers have at least a basic grasp of English. If you get lost at any point, getting back on track is fairly easy because of all the English throughout the city. English might not be common use in smaller cities, so if you’re running late for work and you happen to notice you’ve passed the same building three times because you’re lost, you might really have to rely on hand gestures if you come across a Korean public transportation worker who doesn’t speak English.

Eating out becomes a whole new challenge when you don’t speak Korean, no one in the restaurant speaks English, and there are no pictures on the menu. That’s when I like to play a little game I call Dinner Roulette. I’m sure you can already guess how it’s played. Close your eyes and point at any random item on the menu. Sometimes the Diner Gods smile on you and you receive a nice bowl of kimchi jiggae, but sometimes their sense of humor is cruel and your smiling waitress presents you with a giant plate of cow intestines. Luckily, I’m not a picky foodie. If you are, you might want to consider how the language barrier in a small city will affect your day to day life.

5. Finding new hobbies could be difficult in a small town

I wrote “pick up a new hobby” with a red pen on my bucket list before I moved to Korea. Maybe the same is on yours, but keep in mind that your choices might be limited in a smaller city. Seoul, of course, is so large that any hobby or club you could possibly think of can be found. Smaller cities require a bit more investigation, searching, and maybe even compromising. In my small city, I stumbled upon a ballet studio. Ballet wasn’t something I had really considered when I decided to find a new hobby, but I didn’t have too many options in my small city, so I blindly enrolled and to this day love the classes.

This list of cons should be taken with a grain of salt. This isn’t to say you’ll end up in a tiny one horse city where all the cab drivers are grumpy old men and communication will be impossible. It’s just a list of possible cons that you could experience. I’ve experienced everything on this cons list at least once in my small city, but I still wouldn’t relocate even if I were given the chance. I happen to love my small city, grumpy cab drivers and all. This decision isn’t one anyone can make for you, so take a minute and think over the cons list while I add the final touches to the pros list.

If you happen to live in a smaller city, are there any cons on this list that you agree or disagree with? Perhaps you have a few original cons of your own? Share them below to help our future expats make a more informed decision.