6 Subtle Ways You Might Be Sabotaging Your Classroom Management

If you’re struggling with an unruly class, or if you have one or two students who occasionally get out of hand and frustrate you, it might be tempting to blame the students, blame the administration, or just write it off as a bad class. But there are many ways you might be sabotaging your classroom management. 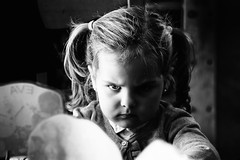 After all, you have a clear set of rules, you apply consequences consistently, you reward good behavior, and you don’t tolerate disruptive behavior.  So, what are you doing wrong? Before you write your students off as just a bad class, consider these subtle ways that you might be sabotaging yourself, and see if any of them are playing a role in your classroom management struggles.

1. Where you are giving your attention

Often, behavior follows attention.  A lot of students like being the center of attention, even if it is negative attention.  If you only recognize or acknowledge students when they are misbehaving, then they are going to misbehave more often to seek out that recognition.

Instead of calling out disruptive behavior, give it as little focus as you possibly can, and instead give as much recognition and attention as you can to positive behavior.

If a student’s behavior is disruptive enough that you can’t ignore it, address it as quickly and with as little fuss or attention as possible, and get back to what you were doing.  Make a special effort to acknowledge and reward good behavior instead.

2. Your tone of voice

More than the actual words you are speaking, your tone of voice conveys volumes.  You can tell a student good job, but they’ll hear it in your voice if you’re not sincere.

You can act patient and help a student with a worksheet, but if you’re really thinking “How can he possibly not get this by now?” it’s going to come out in your voice and make him feel resentful and stupid.

You can try to calmly enforce the rules, but if you’re really feeling frustrated and powerless, you’re students are going to hear a little shrillness in your voice and realize that you’re losing control.

Listen closely to the way you talk in class and see if your tone is conveying something other than what you want to communicate.

Students can tell when you’re getting upset in the classroom.  If you appear frustrated, if you look or sound angry, if you start yelling or making threats, if you get flustered or overwhelmed, what it really communicates to your students is that you feel a loss of control.

Whatever you have to do to stay calm – not just look calm, but actually feel calm and in control of yourself- do it. Take a few deep breaths, think happy thoughts, remind yourself that you’re in control of yourself and these are just kids being kids, and do your best to deal with negative behaviors without getting upset.

4. Thinking you’re punishing a behavior when you’re actually reinforcing it

This might seem like kind of a stupid point; after all, there’s a pretty obvious difference between punishing a behavior and reinforcing it, right?  Well, actually, no. It’s not as simple, obvious, or clear cut as a lot of teachers think.

For example, you might think that stopping class to yell at a student is punishing him, but maybe that student enjoys feeling like he can control you by making you upset, and as an added bonus, he gets to stop class and get out of doing work.

What you think is a punishment is, to that student, actually a reward, and is only going to encourage him to continue the behavior.  You might think that sending a student out of class to work on boring worksheets with an administrator is a punishment, but maybe that student is frustrated because she doesn’t understand what’s going on in class and actually likes to work independently on boring worksheets that are easy for her.

Rewards are the most powerful tool in your classroom management arsenal.  You want to create an environment where students are motivated by the rewards of following the rules and paying attention – whether that means extra game time, doing a fun activity instead of a worksheet, or whatever else works for your class.

A common problem, though, is not putting enough emphasis on consistently and reliably granting those rewards.  It’s easy to promise an extra credit point to the first student to finish a worksheet, or to reward the whole class with five extra minutes of break time for good behavior – the hard part is keeping track of those promises and following up on them.

See also  I Chose The Road Most Traveled

Students aren’t going to work their butts off or make an effort to behave for empty promises.  Be extra careful to make sure that you consistently give the students the rewards that they have earned.

6. Trying too hard to control

This is a fundamental truth not only of teaching but of leadership in general: you can’t control other people.  You can guide, you can motivate, you can create an environment where they will want to behave and do well.

But the more you try to control them, the more they will resist, resent you, misbehave, or lose motivation and switch off.

The one thing that you can control is yourself – your emotions, your tone of voice, how you react to bad behavior.  Focus on controlling yourself, and set a good example for your students.  Let them see a teacher who is calm, confident, patient, enjoying the class, enthusiastic and sincere.

Have you had a difficult class? Do you have any tips or suggestions you would like to add? Let us know in the comments below.