Whether you are teaching in Taiwan, teaching in China, or teaching in South Korea we have all been there. We have started our year with awesome games, but as the months draw on these awesome games start to lose their zing with your students. Time to shake it up a little, below I have compiled the top 8 games every ESL teacher should know. 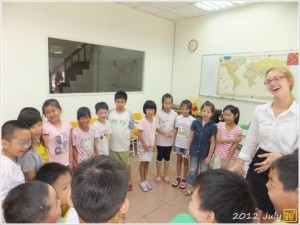 We all know this one, it is basically a take on the game Simon says, except that we are replacing Simon with the teacher.

How it works:
Get your class up on their feet, you the teacher will give the students things to do by saying ‘teacher says …’ followed by an action. So for example ‘teacher says hop on one foot’ at which your whole class should all hop on one foot. If you don’t say ‘teacher says’ before the action and a student completes the action, then they are then ‘out’ (or you can just deduct point from the team so that they can all keep playing)

This is a great game to use for concept checking or even as a warmer. If you have been running through some verbs in class then you can work these into your teacher says game. Why not switch it up a bit, make one of the students the ‘teacher’ and have them give the directions, your students will love to see you the teacher taking orders from one of your students.
I like to get really creative, for example I love yoga, and we all know that there is a plethora of positions that are really difficult, which I love to try to get the kids to do, especially if you have made it a rule to not move, you can go around distracting them or making them laugh so that they will move (mean teacher)

Another one that everybody knows except I like to use a dice to bring in other rules.[contextly_sidebar id=”oMEQXVFhCCZxZRVvgpUb3NiSoamXJF54″]

How it works:
Split your class into two teams, give each team $500 to start with, and then write 1-6 on the board. Think of a word for your hangman and write the spaces on the board. Next to each number write a rule, for example,
1. Miss a go
2. $1000
3. Bankrupt (money goes from your account to the other team)
4. $50
5. Switch (switch team accounts)
6. $10
Teams take turns to roll the dice, if it is miss a go then it gets sent over to the other team, all others the team has a guess at a hangman letter but the either gain or lose money.
This is a great one for vocabulary that you have been learning that day, and you can throw in vocabulary from previously classes. Children in Asia tend to be fiercely competitive so bringing in the dice and the bank accounts really spices things up, especially when a team gets bankrupt, they go wild.

See also  Being Adaptable in Korea

How it works:
First make sure that you have covered time and that all students know how to say the question ‘what is the time?’ and the answer ‘it’s X o’clock’
The teacher stands with his face hidden to the board whilst all of the students stand against the opposite wall and shout the question, the teacher then chooses a time ‘it’s 3 o’clock’ at which point all of the students move forward 3 spaces, this keeps happening until the teacher thinks they are close and then instead of saying ‘its 3 o’clock’ the teacher says ‘its dinnertime’ at which point he/she turns and tries to grab a child, that child is then the next wolf.

This game is specific for practicing times, however time can be a difficult one to grasp, so this makes it a fun way of drilling the sentence structures for both the interrogative and declarative sentences.

This was one of my favorite games to play when I was teaching, it is an exciting board race game that all students seem to love.

How it works:
For this you will need two board erasers, put these against the wall opposite to the board. Put the students into two teams, line them up facing each other so that they have the board to their right and the erasers to their left. Put 2 dots on the board, one for each team to erase, use flashcards/actions related to what you have learnt that day. Choose one student from each team and turn the flashcard, get them to say the flashcard (or sentence) 3 times before they race to get the eraser and then race to wipe their dot off the board. The fastest gets the point.

A good technique to making this game fair is to increase the size of the winners dot and color it in, you will eventually end up with circles the size of beach balls that the kids have to erase, which of course takes longer giving the other team time to catch up. Another twist is to change the dots/circles to funny pictures (pigs, angry birds etc)

This is a great game when you need to go over some vocabulary.

How it works:
Split your class into two teams, pull up two chairs that have their backs to the board and have one volunteer from each group sit in the chair. Write one of the vocabulary words you have been using on the board behind them. The idea is that the rest of their team members try to get the person in the hot seat to guess the word behind them by using other language and sentences surrounding the word.

See also  The Most Important Lesson Learnt In Asia

Note: Any writing, spelling, or ‘air writing’ is considered cheating, the other team instantly gets the point.
This game works amazingly for competitive classes and really gets the students thinking about other areas of the English language they can use to get the point. Plus it’s tons of fun.

This game takes me right back to Christmas when I was a child and watching all of the adults in my family make utter fools of themselves after Christmas dinner. Well now I get to make my students do it.

How it works:
For those not familiar with the game (shame on you) I shall explain. Before class cut out a bunch of pieces of paper that have a word on them (make sure they are words the students will know) screw them up and put them in a bag. Split the students into two teams, take it in turns choosing a student from each team and have them pick a vocabulary word from the bag, the student has to then act out the word without making any sounds, the first team to guess the word gets the point.

A good tip to get the ball rolling is for you the teacher to go first, this does two things; first it shows them how to play the game and secondly it puts them at ease as you can look as silly as possible to make them feel comfortable.

Sticky balls are an ESL teachers’ best friend, and they are incredibly versatile when it comes to ESL games. I think every teacher has a version of sticky target, this is how I like to do it.

How does it work:
Review with your students the vocabulary that you have been covering, then, depending on your artistic flare, you can either draw pictures of the vocabulary on the board or stick the flashcards to the board. Set the class up like you would for eraser racer (number 4 in this article) but replace the erasers with sticky balls. Put an object on the floor around 2 meters from the board (this will be their throwing point; they can’t cross this point to throw). Choose one student from each team, turn a vocabulary flashcard and have them say the word clearly 3 times, once they have said it clearly they can run to get their sticky ball and run to the throwing point, here they have to hit the flashcard/picture that links to the one you had them say. The first team to hit it gets the point, if neither hit you look at the closest one to the target.

This game plays to the competitive side of the students, and can also work for sentences. For example if you have been practicing, ‘there is a (ball) in the bedroom’ turn over a picture of a ball and have them say the whole sentence three times. You will notice they try to rush through the sentence, make sure you get them to say it clearly.

This is a good game for drawing out any vocabulary that the students have been taught.

How it works:
Split your class into two teams, write on a piece of paper the vocabulary you want them to use and have them each use a marker to try to draw pictures to get the other students to guess the vocabulary word you wrote down.
The students that are drawing are not allowed to mime or speak the word, if this happens it is considered cheating and the other team gets the point.

You will find that playing this game can get very loud as you have two teams calling out their guesses at the same time. Try to use vocabulary that will be a little more difficult to guess, for  example a word such as ‘cat’ will be easy to draw and easy to guess, so this won’t last very long.  But a word like ‘bedroom’ will be a little more complex.

And there you have it ladies and gentlemen, my top 8 games for ESL teachers. Do you know of any good games you would like to add? Any effective games that draw the language out of the students? Or even just fun games that you can play. We want to hear about it, Comment below.