Continuing our outdoor activities in Taipei series we bring you part three. The best part of traveling in Taiwan are the various segments of each trip. A seemingly simple hiking trip can easily turn into a multi-layered excursion. 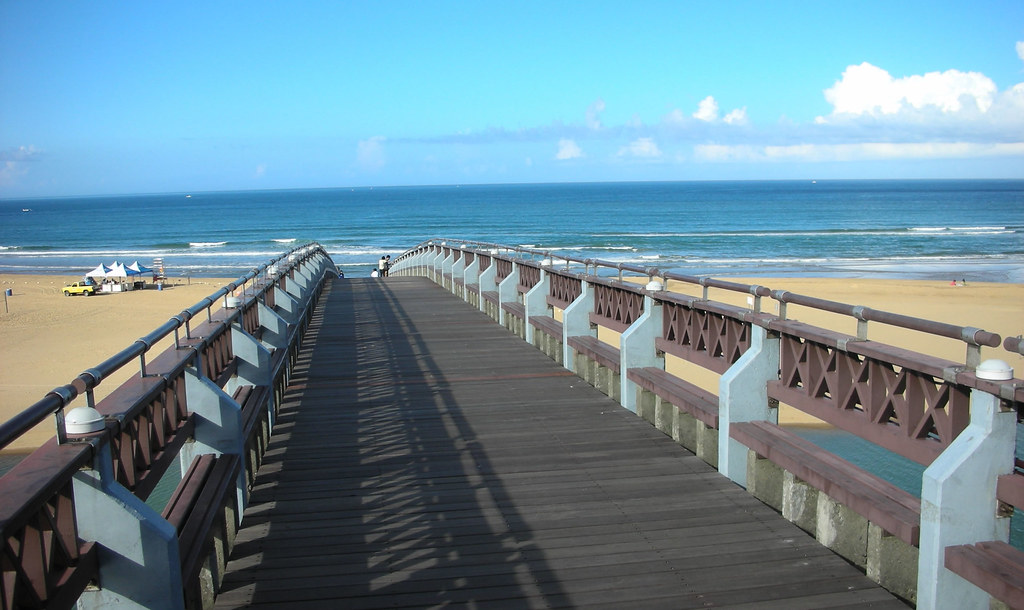 I believe this is due to the unique geography of this small island. Mountains make up the central of Taiwan and will often extend out to certain coasts, thus offering some really stunning views and access to a number of different terrain.

Even a hike in Taiwan that you may have done a few times before can surprise you with more trails and hidden gems. That’s one of the most beautiful aspects of living in Taiwan, the natural beauty.

It’s found, not only, in the mountains, rivers, oceans, and lakes, but all around the country, naturally interweaving itself into the fabric of the modern infrastructure.

As we moved from the mountains of northeastern Taiwan we walked towards the coast.

The Path to Fulong

The path of the mountain let us out at a highway that  curved towards the beach of Fulong. We came to an intersection with a small pit-stop temple and turned right.

As we walked down the highway we encountered a group of girls from the Phillipines who were in Taiwan working – they were all equipped with selfie-sticks and cell phone cameras that were permanently set to the front-facing camera.

The group of seven Filipino girls were accompanied by an older-stout American man.

“It’s a serious disease, they’re seeking help for it,” he said half-jokingly. What he said has quite a lot of truth to it, particularly in Asia. As we walked past the group of girls they immediately began to giggle and take secret selfies with the American, Irish, British, and Chinese people in the background.

When they got the courage to ask us to take pictures with them, we weren’t allowed to leave their presence for the next 15 minutes.

A Foreigner in a Foreign Land

As we walked alongside the frenzy of selfie-takers we talked with the American about his life in Taiwan. He had been living in Taiwan for the past twenty years, married, had kids, divorced, got a new partner, and was living happily.

This kind of story isn’t uncommon in Taiwan. The island has an aura about it that brings and keeps people in; the combination of low costs of living, convenience, friendly people, deep culture, great food, nature, and tropical weather attracts people from all over the globe.

I’ve heard multiple stories about people coming to Taiwan for a short period of time and had a continued desire to return (I am a prime example); however, It definitely takes time to adjust to living in a foreign place.

The customs are different, the language barrier is often a large bridge that disconnects foreigners from locals, and making new friends can be difficult. Culture shock is a reality for almost all travelers. The good news is that Reach to Teach has plenty of articles to help you deal with the feeling of culture shock.

We arrived at Fulong Beach thirty minutes before they were closing. As crowds of people were exiting and entering the beach we slipped in, past the entrance fee. Much to my dismay, we were playing the “clueless foreigner” card. Another careful line that needs to be walked when being a foreigner, understand your limitations and be respectful of the local rules and regulations.

When we walked onto the beach we saw mounds of sand formed into amazing sculptures. I personally love it when I get somewhere and there is an unexpected event happening.

That weekend was actually the Taiwan World Sand Sculpting Championships. Contestants from all over the world came to Taiwan’s Fulong Beach to sculpt with it’s shining golden sand.

As we wandered the beach for a while longer and watched the sky turn colors of purple, orange, and pink we prepared ourselves to walk back toward the train station. Fulong station was only a short walk away from the beach and we could conveniently use our Yo-Yo cards (public transportation cards) to get back to Taipei City.

Our eventful day trip was over, but our adventures in Formosa (lit. beautiful island) continue every day. Whether we are traveling to a far off land or commuting to work, there are always ways to change our perspectives and view our surroundings in new and interesting ways. Let every day be an adventure.