As we wandered the streets of the now-famous Gangnam district in Seoul, South Korea, we could not help but notice the strangeness of the dark restaurant windows and the quiet streets. In my seven months in Seoul, I have not witnessed such calm on a Friday night. 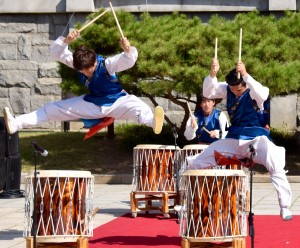 This Friday was special, though. It was the Friday before Chuseok, the Korean day of thanksgiving.

Chuseok literally means “in the middle of fall.” It occurs on the 15th day of the lunar month equating to August. This year, it fell on September 27th in the Gregorian calendar. During this time, Koreans celebrate with delicious Korean food shared with family members.

As many as three-quarters of the country travel during the holiday period. With nearly half of the South Korean population living in the Seoul metro area, the mass exodus toward the homes of their parents and grandparents in the rural area far exceeds the capacity of the roads.

Though the number of Koreans leaving the city is decreasing as more of the older generations have homes in the city or can visit family in more central locations, there are still bound to be massive traffic jams on Chuseok. For one of my students, the two-hour journey to a city in the South of the country took a full seven hours.

Families often visit the burial sites of their ancestors to give thanks for the good harvest. In the home, they make (these days, they often purchase) freshly made rice cakes known as songpyeon and give gifts of fresh fruits and vegetables.

All of the traditions sound much like the American version of Thanksgiving celebrated in late November in memory of the generosity of the Native Americans who helped the early English settlers in the New World. However, talking with many of the women in my adult classes reveals that the weekend seems to be more stressful than I ever remember Thanksgiving being, even for the women of my family.

In Korea, family tradition is extremely important. Two pieces of that tradition that show the paternalistic history of Korea are the importance of the oldest son in succession and gender roles. The responsibility of leadership falls on the oldest son in any generation.

Families will congregate at his home for holidays, and his immediate family is expected to provide for their guests. Much of this responsibility falls on his wife, who is in charge of preparing the food for the Chuseok meal. This often leads to a busy weekend of entertaining and providing for the in-laws, something even those in the West can relate to.

For those of us foreigners in the country, we have no such obligations and are free to play tourist. As it is one of the two prominent national holidays, there are plenty of touristy things to do on Chuseok. On that day, the palaces scattered throughout Seoul open their gates, waving the usual 500-3,000 won fees.

My family and I decided to visit the largest and most prominent palace, Gyungbokgung. Built in 1395, it was the seat of the Joseon King for nearly two hundred years until the Japanese burned down many structures during an invasion. Today visitors can see much of the expansive grounds as they likely would have looked hundreds of years ago.

Throughout the day, there are performances in front of the museum. We caught a spectacular drum performance that drew a massive crowd. As we wandered the palace grounds, we could hear singers and other traditional music continuing for the remainder of the hour.

As a tourist experience, the visit to the palace was entertaining and provided many opportunities for wonderful photography. However, if this is not the kind of experience you are looking for in Korea, be wary of this time of year. During the Chuseok holiday period, many restaurants and stores will be closed.

Even the traditionally touristy Insadong artisan market was closed. Most Koreans have four to five days off around the holiday. Because it fell on a Sunday this year, many establishments were still closed on Monday and Tuesday. Even late in the week, the city is still returning to normal operations.

Be especially attentive when booking travel around this time. As most of the country is on the move in some direction at this time, flight and train tickets sell out weeks in advance, and most arterial roads in and out of the large cities will be severely congested.

Despite the challenges, Chuseok is still a great time to be in Korea. It’s one of the times of the year that the true culture and heritage of this fascinating country really come to life. If you can brave the crowds of tourists in the popular areas, there is a lot to see and do.

See also  A New Year’s Resolutions List For The Traveler

Have you ever been in Korea during Chuseok? Or any other festival in Korea? Let us know about your experiences in the comments section below.