Last week we brought you the first installment of our teacher interview we did with Mary McCusker, a teacher that dropped everything in New Jersey to head to South Korea to teach English. Read the rest of her excellent adventure here. 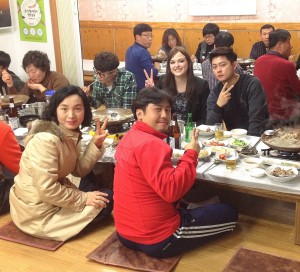 6. What are the positive and negative aspects of living in Korea?

Korean hospitality, honesty, and generosity are unlike anything I’ve ever experienced. My apartment neighbors frequently knock on my door to give me fresh fruits, baked goods, or other treats. One time, when word spread that I was sick, an entire bag of groceries appeared on my doorstep.

During my first week, my co-teacher came to my home with a pizza, insisted on scrubbing my floors, spent half an hour showing me how to work the Rubik’s cube of a washing machine, and offered to take me shopping.

After I tripped and fell on my way to school during my first week of teaching, resulting in several torn ligaments, my other co-teachers insisted on driving me to and from school every day. Sometimes, strangers walk up to me to give me snacks or a coffee, saying, “Welcome to Korea!”.

Koreans are also the most honest people I’ve ever met. At home in New Jersey, it’s a common occurrence to get ripped off (especially if you’re a foreigner), to get robbed or pick-pocketed, or worse. Not in Korea. I have never once been taken advantage of as a foreigner – in fact, I’ve received “foreigner discounts” and, at times, haven’t been charged at all.

I once lost my wallet downtown and immediately assumed I would never see it again. The next day, the wallet was waiting for me outside of my apartment with everything still inside. Someone had tracked down my information, driven across the city, and safely delivered it back to me.

The sense of community and togetherness in Korean culture is very touching. In just about every apartment building, there are community plants, brooms, cleaning supplies, slippers, and more. Everyone pitches in what they can and we all share what we have.

In addition to your friends and co-teachers, you’ll develop very special bonds with the people in your community – store owners, crossing guards, street vendors, neighbors – pretty much anyone who you encounter regularly. For me, Korea felt like home within just a few weeks of arriving.

There is a deep respect and reverence for nature and wildlife that I truly admire. You will seldom find trash anywhere. I’ve seen countless Koreans, including small children, stop to pick up the rare piece of trash that will be on the sidewalk. Plants, trees, and beautifully landscaped terraces are ubiquitous.

People will stop on the sidewalks and take a few moments to admire them, and then move on with their day. Even in the most crowded cities like Seoul and Busan, mountain vistas, and verdant gardens abound. People truly value and respect their communities.

Oh, and the food in Korea. You will never find any written piece about Korea without a section devoted to raving about the food here. I’ve always been a boring eater, as I’ve spent an embarrassingly large portion of my life living off of Mac & Cheese, peanut butter sandwiches, and chicken nuggets.

Needless to say, the thought of spicy food and chopsticks sounded like a nightmare.  But within a week, I fell in love with Korean food. The flavors, the side dishes, the tender meat, the spices, the fresh vegetables and fruit – I salivate just thinking about it.

The first thing that comes to mind is the staring. When (not if) people stare at you – don’t be offended. And when I say stare, I mean, you’ll look up to see an entire bus full of wide-eyed people with a look on their face as if they’ve just seen an alien.

Sometimes, cars and motorcycles will come to a screeching halt and almost cause accidents because that’s how alarmed they are to see a foreigner. (Granted, my city has one of the lowest populations of foreigners in the country, so others’ experiences may differ).

It’s one of the most common complaints about Koreans I hear from the ex-pat community. It’s pure curiosity, and if you lived in a country where you shared the same ethnicity as 97% of the population, you would likely stare at someone in the scant 3% too.

Still, given the very high emphasis on appearance in Korea, I find it difficult to embark on my occasional walks down the street to the pizza shop in a pair of sweatpants and no makeup without wishing I was completely invisible and wouldn’t have to face any stares.

During my first week teaching, I was getting very frustrated as several students kept staring directly into my eyes about one foot away from my face without saying a word. “I guess personal space isn’t a thing here,” I thought. Then, one of them said, “Teacher…I’ve never seen blue eyes before! Pretty!” And then it all made sense.

There are days when I feel like a circus freak, but I’ve gotten used to it. People will stop to take pictures with you. Strangers will sometimes ask where you’re from and pepper you with other questions. Despite the frustration (unless being stared at is your thing) accept it, and be kind! You’re not just representing yourself; you’re representing your country.

7. Have you had the opportunity to travel much inside and outside of Korea?

I have had plenty of opportunities to travel during these past six months, as there are many holidays, three and four-day weekends, and vacations. Korea is a small place with quick and efficient transportation, so taking a weekend getaway across the country is completely feasible (and highly recommended!).

Beautiful islands dot the seas just off the coastline of Korea and are just a short ferry ride away. Over my summer vacation, I took a ferry to Fukuoka, Japan, where I stayed for five days. Some EPIK friends traveled to Singapore, Malaysia, Thailand, Vietnam, among many other places. If you teach in Korea, I guarantee that you’ll have plenty of opportunities to travel in and outside of the country! 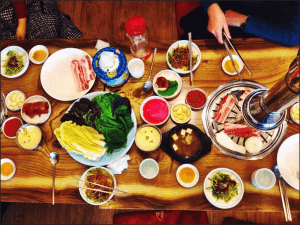 I work at two different schools: a “visiting” school (Monday and Tuesday) and a “main” school (Wednesday – Friday) from 8:30 – 4:30 PM. Both schools have a very energetic, sometimes chaotic, environment. I still hear phrases like “Don’t run in the hallways!” and “Keep hands to yourself!” echoing in my head from back when I was in middle school.

Erase these rules from your memory. Students in Korea are generally quite respectful if they are sitting in a classroom, but outside of the classroom, it’s a free-for-all. Several times a day, as I sit at my desk, my coffee starts rippling like the jello from Jurassic Park, as I hear thunderous stampedes of students coming closer and closer.

Students will sprint down the hallways, screaming at the top of their lungs, playing, throwing things at each other, spraying water guns, carrying (and dropping) each other, wrestling – you name it. No liability concerns here as students climb to the top of monkey bars in the school playground and proceed to topple each other off the highest bars in a lively version of “King of the Mountain”.

Each week brings another new crop of kids with arm casts and leg splints to school.  The school nurses are constantly on their feet, tending to injuries. Now I understand why I received such puzzled stares as I wrote rules on the board on the first day of school such as, “Keep your hands to yourself.” and “Don’t run in the hallways”.

All I can say is that it’s a wildly entertaining environment. Be prepared for a fair amount of spontaneity at your schools. Sometimes, a class will show up to your classroom when it wasn’t written on your schedule. Other times, no one will show up at all because of an assembly you weren’t aware of. At 4:30 PM, you might be asked to join a teachers’ dinner…at 5 PM.

So, just be prepared for anything, go with the flow, and revel in the chaos when it does break out… which it will.