Ko-Yon Jeon: A Party in Seoul

Each year young Korean athletes, clad in their crimson or blue, face off in a series of competitions to prove their dominance over their rival. Korea University and Yonsei University are two of the oldest institutions in South Korea, founded in 1905 and 1885, respectively. 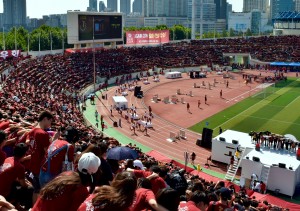 They are regarded as two of the three most prestigious schools in Seoul, Korea and graduates regularly go on to occupy top positions in government and private enterprise. The rivalry between the two has been embodied in an annual athletic competition since 1965 and has become a big part of Korean culture.

Currently, the weekend event involves competitions in rugby, soccer, ice hockey, baseball, and basketball. Korea University students and alumni call it Ko-Yon Jeon while those from Yonsei call it Yon-Ko Jeon. I will refer to it as Ko-Yon Jeon because of my connections at Korea University.

The athletics are really only a sideshow. The fun is watching and mixing in with the students. Click To Tweet This year, I attended the final event, the soccer match at Mokdong stadium on the west side of the city. We arrived about 15 minutes before kickoff, and the stadium was absolutely packed.

With the extended midline dividing the stands into separate sea’s of blue and red, the large stadium was overflowing with energy. It wasn’t long before each side began blasting their own competing music, engaging all of their students in group dances and songs. With the speakers pounding and the crowd jumping and shouting, the match began apparently to no notice of the spectators.

It quickly became obvious that the students were not here for the match. The music never subsided; in fact, it got louder and more intense. Pride clubs from each school danced in flashy, billowing dress on stages like well-choreographed cheerleaders as the stands shouted their school’s fight songs.

Instead of the sounds of the match or announcements about plays and violations, all that I could hear were the competing beats of fight songs coming from the massive stacks of speakers each school had placed in front of their half of the stadium.

Standing behind the highest row of seats, I shifted and craned to try to watch the back-and-forth match a hundred meters below, but it was of little use. Arm in arm, the students jumped around in a frenzy of institutional pride. By the 40th minute, the heat and energy were too much for me.

The match would end in a draw, but I can’t imagine that anyone really noticed. The real party had yet to begin. Around 6 pm, my friends and I headed to Anam, the area near Korea University’s main campus. Things had yet to get moving, but there were already banners strung across the street and advertisers handing out balloons.

My friend had mentioned that there may be free food. Although few places looked promising, there were multiple portable bars with students pouring cup after cup of cheap beer for passers-by.

As the night grew darker, the area grew brighter. The streets soon became awash in excited students and alumni clad all in proud crimson. Around 7:30, restaurants started putting out dishes of Korean food.

In a traditional “train game,” groups of students from the same club or class formed a train (hands on shoulders) and chugged around the streets in search of the 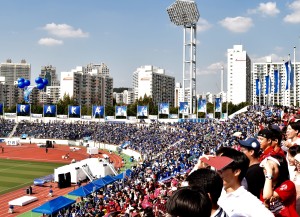 fabled free food. When they arrived, they shouted a motivational and patriotic chant in thanks to the alumni who had picked up the tab in advance.

Although I was wholly ignorant of the tradition, the restaurant owners eagerly engaged us foreigners and fed us tasty dishes and cups of their beverage of choice. After munching on too much food already from a couple tables outside, the owner of one establishment waved us inside, noting that he had a table for us in the back.

We squeezed through the packed restaurant to find a small table along the back wall where they provided a simple soup and a spicy vegetable stew for everyone. While we devoured plate after plate, alumni cycled through the empty chair at our table to hear about the curious foreigners who had come to support their alma mater.

After an hour of chatting and eating far too much food, we had to slip out to catch the train. The alumni we passed on the way out excitedly said goodbye and returned to their celebrations. Pushing our way through the crowds around the subway terminal, we were among the few who were already turning in for the night.

Music and chanting could still be heard coming from all corners of the small district, and I can only assume the celebrations continued on early into the morning. It would seem that no one realized the whole competition had ended in a draw.

Have you ever experienced this event? Or any other event in Korea? Let us know your experiences and thoughts in the comments section below.