Like all agricultural societies, Korean life has always centered on tightly knit families. Large families have been prized and over many centuries families intermarried within the regions of Korea to form large clans. Family names reflect this. A dozen family names predominate, especially Kim, Park, Lee, Kang, and Cho. Custom forbids people marrying within their own clan, no matter how distant the cousin might be. In order to know who is who, families and clan keep detailed genealogical records that might go back many hundreds of years. Even in today’s westernized Korea many people can still recite the glorious history of their clans and take pride in them.

Koreans follow a variety of religious ideas and organized religions. They always have because as practical people, they have tried different ways to reach a fundamental Korean ideal; a sense of harmony and balance in everything. The Republic of Korea’s flag represents this ideal. The central circle is divided in two halves. The top red part is yang, the positive cosmic force meaning fire, day, light, and all things constructive. The bottom blue half represents the passive side of existence – water, night, death and repose, yet the two are joined perfectly into a whole. The bars in the four corners of the flag are also about harmony and balance. The three lines at the top left means “heaven.” The broken lines opposite it at the bottom right are “earth.” The bars at the top right, two broken and one solid mean “water,” while the lines opposite mean “fire.” According to this theory all life, and even the cosmos, is balanced in this way.

The oldest religious ideas in Korea are called Shamanism today. These are beliefs that the natural world is filled with spirits, both helpful and harmful, that can be addressed by people with special powers called shamans. Herbal medicines, dances, chants and other ceremonies mark the work of shamans, most of whom are women. Though few people believe in the religious ideas today, they do accept old ideas about the natural world and use many ancient herbal remedies. 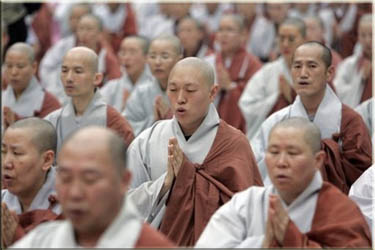 In the first half of the First Millennium A.D. Buddhist monks made their way across Central Asia, through China and into Korea. It was the Mahayana, or Greater Vehicle, variety of Buddhism in which many saints and demons inhabited the spirit world. The Shilla Dynasty that unified Korea in 668 made it the official religion of the peninsula. Royal patronage allowed many magnificently decorated temples to be built and today thousands are still to be found. One uniquely Korean feature of Buddhist temples is a side chapel dedicated to a mountain spirit. He is usually shown as an old man with a pet tiger. It is a symbol of native shamanistic beliefs, and nothing like the original precepts of the faith. Buddhism, though, is not a centralized system and so there are many sects in the world today. In Korea, some monks are married and do business: it’s always a shock to see gray-clad, shaved headed monks with cell phones and driving BMWs. Others are celibate. However, one version of ascetic Buddhism that developed in Korea called Son was transmitted to Japan and then around the world where it is known as Zen. Today about forty-five percent of Koreans follow Buddhism.

About fifty-one percent of Koreans are Christians. The Roman Catholic branch of the faith arrived in the 17th century with missionaries who also visited China and Japan. Christianity was prohibited by many of Korea’s rulers, and some Christians were martyred. After World War II, however, Catholicism grew rapidly, but not as fast as Protestantism. The first Protestant missionaries (Methodists) arrived in Korea in 1884. They began programs of education for young Koreans, many of whom would become leaders of the country. After the Korean War, numbers of Protestants rose dramatically. Today, almost forty percent of Koreans are Protestants, divided into 113 denominations. That number is growing as evangelical Protestants continue to work in the country.

Of all philosophical systems those attributed to the Chinese wise man called Kung Fu-Tse, or Confucius, have had perhaps the greatest influence on Korean ideas. Confucianism is not exactly a religion, but is a political/social system based on subordination – sons to fathers, wife to husband, people to rulers. It emphasizes proper rituals, ceremonies, and conformity to decorum, or standards of correct conduct. Education in classical Chinese was the basis for government service and the way for young men to rise in the world. The Confucian system began to become important in Korea’s kingdoms in the 7th century A.D. and became the official state cult in the 14th century with the Chosun Dynasty. Even as the old kingdoms have passed away and Korea has become a modern state, Confucian ideas remain strong. This is seen in the way families are organized, in devotion to ancestors, and in everyday behavior. Koreans tend to be formal when dealing with non-family members. For a Korean to address a stranger by their first name would be the depths of rudeness: “Mr” and “Mrs” are used routinely even among co-workers. Bowing to one another is routine. And Korean men almost always dress in formal business suits for all occasions outside the home that are not vacation or fun-related. The rules of decorum demand formality, if for no other reason than to show respect for other people and thus make for better social relations. 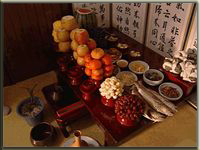 Until recent times, Koreans used a different calendar to calculate the year and dates for holidays. This was the old Chinese lunar calendar in which months began with each new moon. Because lunar calendars rarely coincide with modern solar calendars, Asian festivals such as Lunar New Year hardly ever fall on January 1. Perhaps the greatest Korean holiday is Ch’usok, or Harvest Moon Festival, which is held on the 15th day of the Eighth Moon according to the lunar calendar. That is usually in September or October and is marked by the rising of a full “Harvest Moon.” Ch’usok is usually described as a kind of Thanksgiving for a good harvest, but it is really an ancient holiday dedicated to the ancestors. Families gather from all over the country and from overseas for the great holiday. Visitors to Korea are always warned to stay where they are at Ch’usok time because almost everyone is on the road going back their ancestral homes: journeys that by car would normally take two hours might take fifteen!

All across Korea, the eldest sons of the family will clean and prepare the burial mounds of their most recently deceased ancestor. Koreans traditionally buried the dead under mounds standing upright in coffins made from six planks of wood. These represent the four cardinal points on the compass plus a plank for heaven and the other for earth. Corpses either face south or toward some important spiritual part of the landscape such as mountains because these are said to be the homes of the spirits of the land and sky. Even in these modern times ancient symbolism remains important in burial and memorial traditions

In many homes, memorial shrines are set up to honor an ancestor. On the morning of the Ch’usok festival, the family prepares the dishes with which they will honor their ancestors. Special dishes are prepared and set out on tables in front of the shrine. For instance, fresh chestnuts gathered from the forests are cut into jewel-like shapes, for easy stacking. Stacking things, whether stones or food, is a form of prayer. Food is offered to the ancestors and every dish must be passed over burning incense before it is acceptable. The memorial service table has a set order of dishes: five rows of different kinds of foods and sometimes cups of ch’ongju, a famous rice wine. The number five is important in Confucian thought. And fish are placed on the eastside with their heads also facing east. Fish always mean good fortune and the east signifies eternal life.
Everyone bows to the ancestral shrine, including the women of the family. Until fairly recently only men were permitted to carry out this ceremony, but times have changed and women now have equal access to religious rites. The whole ceremony is called Jesa, or “ceremony to the dead.”
After the ceremony in the home, the family will walk to their ancestors’ burial mound. There they bow again 2 1/2 times and offer the spirit food and drink. Some of the food is set out around the tomb facing certain directions in conformity with the Confucian belief that cardinal points on the compass have mystical powers. Food and stones are once again piled up as signs of good fortune for the family and for the spirits of the ancestors.