Summer School: The Perpetual Studies of Students in South Korea

Talk to just about anyone involved in South Korean education, and you quickly learn that the pupils of this rising Asian nation are tired. Not only because of the daily school grind, the fatigue also comes from the invasion of continued academics into what little break they have. 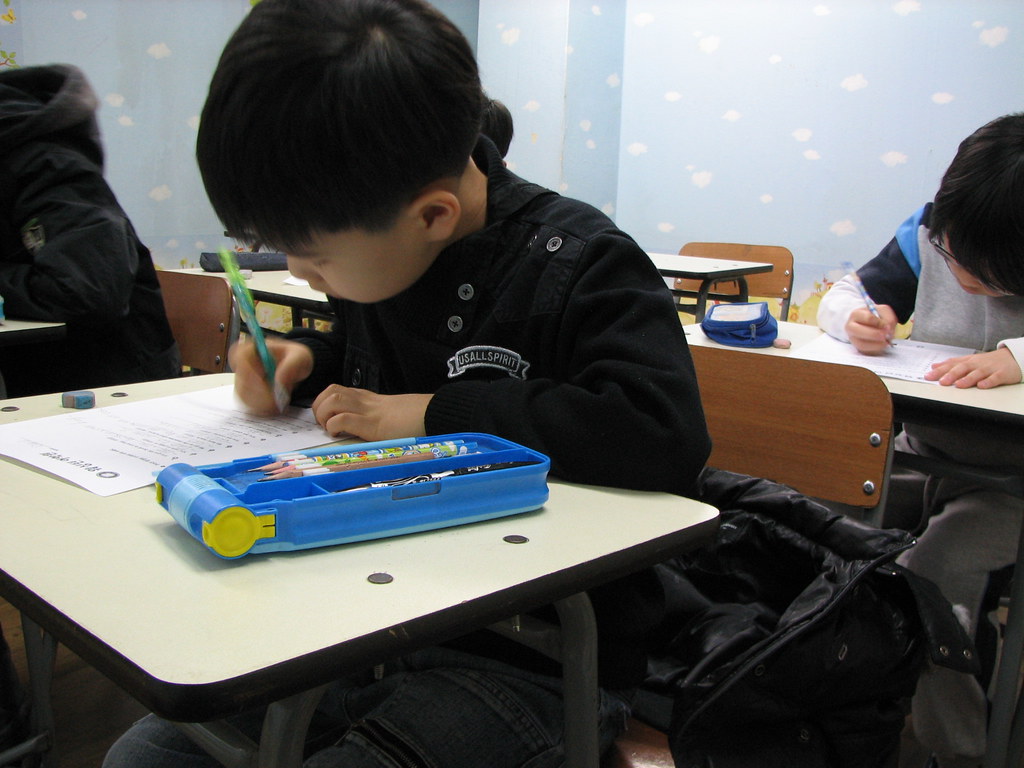 In South Korea, public school takes a summer holiday in late July. However, unlike the experience of those of us who grew up in North America, the end of public school is not the beginning of two-and-a-half months of responsibility-free roaming of neighborhoods, extended family vacations and summer camps full of rope swings and campfires.

No, all this means is that for a month in the middle of the year, the private schools (“hagwon” in Korean) will get a boost in attendance as parents shove their exhausted youngsters into hours of extra schooling.

The first thing for outsiders to grasp about Korean public school is that it is only a part a child’s academic education. Students arrive at their schools between 8:30 and 9:00 a.m. Dressed sharply in their school uniforms, they head promptly to their home room.

Finding their desks, they begin preparing for their first lesson before the teacher even arrives. They remain at that desk for most of the ensuing seven hours – instructors rotate rooms instead of the students. For most, the final bell is not the end of their studies.

For my middle schoolers, twice a week, they come to our English school to receive extra instruction for nearly three hours in extra preparation for their school exams. The other days of the week, they spend the afternoon and evening at a variety of math, music, and martial arts training academies.

Between sessions they try to fill in as many answers in their repetitive workbooks as they can, so they don’t have to stay up late doing them when they get home.

Because of continued one-upmanship among parents and schools, the Korean government has enforced a 10 p.m. end time for after school programs. (At one point, they had banned the schools altogether.) I have heard that some parents work around this by hiring online tutors in the evening, but none of my students know anyone who does this.

During the summer, the grind certainly slows, but by no means does it stop. Many students use all of their new free time to attend optimistically-named “summer camps.” I have visited such a camp. At the Yeongpyeong English Village on the eastern edge of Seoul, students speak, eat, sleep and live English for a week at a time.

With several hours a day in the classroom and other group activities – solely using the English language – students study even more than they had during the academic year. I have heard that the camps can be a great deal of fun, but it certainly comes with the continued stress of academics and communication in a foreign language.

Other camps focus on math, science, music and other subjects. One of my adult students, a middle school teacher herself, told me the story of her daughter’s last summer. Instead of taking an offer to travel abroad, she volunteered to enroll in a summer math course. For seven hours each day for four weeks, she drilled math problems backward and forward. By the time she returned to school in the fall, she was a full year ahead of many of her peers.

While most “camp” and hagwon attendance is mandated by the parents, this young one made the responsible decision to get ahead. The question then becomes why would she forego the opportunity to take a rest from the months of rigor that comprise her everyday life?

The answer is the college entrance exam. Each November all high school seniors wishing to go to college (over three-quarters of the whole) converge on schools in a wave that requires alterations to Seoul’s vast infrastructure system to take the final and critical piece of their university application, the CSAT (College Scholastic Aptitude Test).

For over nine hours, these youngsters wrack their brains to recall methods of solving math problems, grammar rules of various languages not limited to Korean and English, and arcane scientific and historical facts in order to prove that they are worthy of the most prestigious universities.

While admission to the top universities is not solely based on these scores, without the right score, all of their other efforts would have been for naught. To determine admissions, universities rank by their CSAT score, increasing the dog-eat-dog mentality of student competition.

This singular focus of all university-bound youngsters drives them in the same direction to master the same skills necessary for getting top marks on the exam, even if it means giving up their summer break.

Some students certainly use the summer time for activities other than academics. Families with the resources may travel outside of Seoul (South Korea’s capital and home to half of its population) or to overseas destinations like Japan, China, and Taiwan. However, these are usually weekend trips because students must return to class on Monday.

For high school students, some take the opportunity to get a summer job. This usually involves working part time in the mornings or on the weekends, so they still have time for their continued schooling.

While summer is certainly a time for some much-needed rest, there is by no means a full break from the academic rigor that defines the lives of South Korean kids. With a month remaining in the spring semester, students aren’t looking far beyond the next round of exams.

When I ask my students what they will do this weekend, I consistently get the responses of “play computer games” and “sleep.” I can only hope they will have time this summer for these two ubiquitous hobbies.