A Guide to Exploring Jeonju

The Hanok Village near our host’s house shows the traditional peaked roofs and swooping eaves of pre-modern Korea, but this one looks somehow different. Its straight lines and clean roofs belie its recent renovations. Similarly, Jeonju presents a deep cultural heritage just beneath a surface of tourism and modernity. 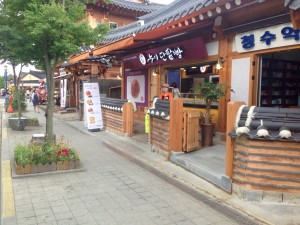 Jeonju was the spiritual capital of the Joseon Dynasty and home of the ruling Yi family, which controlled Korea for 500 years. The old city wall once surrounded a few square kilometers, but all that remains of these walls is a single gate that stood at the southern entrance to the city, the Pungnammun Gate.

The walls of the emperor’s palace still stand, and the Hanok Village will lead you right to it. As a fun fact, if you happen to be in Korea when war with the North breaks out, being in Jeonju might be a temporary safe haven because the remains of Kim Il-Sung’s ancestors are still buried in the mountains. According to our host, the North wouldn’t risk bombing the city for fear of destroying the remains.

For foreigners, getting to Jeonju is cheap and easy.

A free shuttle runs between Seoul and Jeonju every Friday, Saturday, and Sunday from March through December. The bus leaves from the bus depot outside exit 6 of Gwanghwamun station in Seoul at 8 a.m. and departs Jeonju from the parking lot of the National Intangible Arts Center at 5 p.m. You will need to reserve a seat online beforehand because the bus is always full. You will also need to bring your foreign passport. The ride takes about three hours, and there will be one stop on the way.

The city is foreigner-friendly, but as any true traveler knows, the tourist attractions are only a curiosity. The real fun happens with the locals. My traveling companion and I were able to find a host through Couchsurfing, and we made plans to stay the night, catching the return bus on Sunday. He met us at the museum and indulged our curiosity, but the rest of the trip was anything but standard.

The main attraction here in the Jeonju is the Hanok Village, located just outside the old city perimeter.

This quaint classical village provides visitors with a look at traditional Korean housing while offering all of the modern treats and amenities you would expect from a good modern tourist attraction.

The long main drag is lined with shops and cafes where you can purchase all sorts of souvenirs and snacks. On a corner of the central intersection is a small bakery selling famous choco-pies. Tourists toting brown and orange bags have marked themselves as patrons, stocking up on the sweet souvenirs. Our host kindly bought us a pair of them, and we immediately sampled the delicacy and were not disappointed.

Before we could even finish our choco-pies, our host insisted that we try a fried squid on a stick. Feeling like a kid at an amusement park, I hesitantly plucked off one of the wiggling tentacles, caked in fried oil. Much like salty calamari, the taste was actually quite pleasant. We wolfed down the sea creatures as we walked the brick street toward the old palace.

Behind the palace’s stone walls are quiet and open courtyards connected by pathways leading to the primary historical sights. The path will lead you directly to the emperor’s chamber in which hangs the only surviving painting of the Joseon Dynasty’s first king, Taejo.

In other parts of the palace, you can find an old library holding the last remaining copy of a scribe’s record of the king’s daily activities and a museum with portraits of other Joseon kings. If you don’t speak the Korean language, I suggest finding someone who does to take you through these museums as most signage is not translated well (if at all). The cost of entry is 3,000 won (about $2.75) for adults.

Outside the village, we visited the Jeondong Catholic Cathedral, a romanesque building that looks like it belongs in southern Europe. The cathedral now stands on the site where Christians were martyred under Confucian Joseon rule.

Our final tourist stop was the south gate of the old city. It is a short walk from the Hanok Village and lies at the center of a traffic circle lined with shops. Though enjoying the sights, we wanted the Jeonju experience, and that meant finding food.

Jeonju has a reputation for exceptional food and drink.

It’s two specialties, which go well together, are bibimbap (mixed vegetables with rice) and makgeoli (traditional rice liquor). While many eateries

bear a mark on the free tourist map, our host led us to his favorite location. A few hundred meters north of the Pungnammun Gate, down a little side street, we found this small restaurant with a wooden facade.

We each ordered a large bowl of bibimbap topped with raw beef, a common addition to the dish. You can ask for it without. Our host also ordered three large saucers of cinnamon makgeoli. Tasting much like eggnog, this rice drink was a great complement to the huge bibimbap bowls and wide array of side dishes common at Korean restaurants.

After stopping at a chain cafe to get a bingsu desert (shaved ice with fruit and ice cream), we dragged our full bellies back to our host’s home for a short respite. However, our cultural lessons would soon take us back out for more food.

On the way out of West New Downtown, we stumbled upon the Camino de Santiago Cafe. It turned out to be our host’s favorite. Unfortunately, the owner was not there, but our host excitedly explained how the kind gentleman who owns the cafe prepares the best coffee he has ever tasted. Using only the best beans from far off lands, he does not disrespect them in lattes and macchiatos but offers his guests the best hand-drip cup of coffee in Jeonju.

About ten minutes by taxi brought us to a plain restaurant across the Majeon Bridge a block north of Yuyeon-ro. Even at 6 p.m., the place was already packed. In fact it was so packed, they sent us to their second location across the street. Settling at one of the last tables, we ordered a meal that got us a variety of dishes and a large copper pot of makgeoli.

Starting with some jeokbal (pigs feet), kimchi pancake, fried egg, and soup, we thought we would be set for the night, but before we even got started on some of the dishes, they started bringing out more. We combined food on plates to make room for the next round, hot out of the kitchen.

Squid, octopus, ginko beans, fried rice, and boiled beef rounded out the immense meal. The three of us very hungry men could not finish everything. Four to five people would have been satisfied with this amount of food. The final tab: 35,000 won (~$32).

Too energized and with too much of the night remaining, we took a cab back to the old city near the Hanok Village. Buried back in the neighborhoods, we found his favorite late-night hangout. At first, it appeared to be a simple grocery stand, but the man out front roasting dried fish over coals identified it as one of the drinking establishments popular in Jeonju.

Again finding the last table, we ordered two bottles of Hite beer (brewed and bottled in Jeonju) and obligatory plates of baked, dried fish and squid jerky. To me, the food was less than appetizing, but for those who like the pungent fish taste, it makes a great snack to complement the steady flow of bottled beer.

Slowly munching our dry snacks, we discussed everything from Korean culture to European economics until the large clock on the wall crept toward 11:30.

Even at its touristy focus, Jeonju’s modernity is obvious while its culture rests beneath the surface. With the help of an incredibly kind host, I was able to take a peek behind the curtains of Joenju’s pretty facade, and what I found was the authentic lives of these distinct people.

If you’re planning to visit Seoul, I highly suggest that you take the three-hour ride to see the heritage sights, but if you do, I insist that take the time to find one of these veritable pleasures off the beaten path.