A Tour of the DMZ

A Tour of the DMZ

There are few places in the world where that thin black line that separates two countries on a map is actually visible on the Earth’s surface. Looking out from the observation tower, I could see the fence line with its adjacent service road stretching into the jungle both east and west. 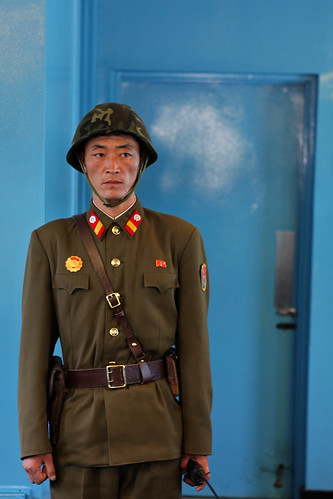 It was not the actual border, but it drew the southern boundary of the most ironically named place on the globe, the “De-Militarized Zone” or DMZ that separates North and South Korea.

Seventy years ago, when Allied forces rolled onto the peninsula to accept the surrender of the Japanese who had colonized Korea for nearly four decades, they divided the country at an arbitrary midline: 38 degrees north.

The 38th parallel was only meant to mark the regions of temporary control between the Americans in the south and the Soviets in the north. Plans for an interim government never materialized, and mistrust between the two superpowers led to the rise of separate and independent governments.

In the North, the Soviets installed the former freedom fighter and head of the Korean Workers Party, Kim Il-sung. In the South, the Americans paved the way for the rise of Syngman Rhee, an American-educated revolutionary sympathetic to the capitalist cause.

The independent governments stood for only two years before Kim Il-sung gained permission from Soviet premier Joseph Stalin to invade the South in an attempt to reunify the country under the communist flag.

The invasion of June 1950 was nearly successful as Rhee’s government fled south to the port city of Busan, allowing the superior Northern force to roll over the peninsula. Spearheaded by the United States, United Nations forces came to the rescue with an amphibious invasion at Incheon, just a few miles from the former capital of Seoul.

Quickly dividing the Northern forces, UN troops pushed the North’s armies to the northern end of the peninsula. In a brash move that nearly started World War III, General MacArthur went up the Yalu River likely intent on invading the new People’s Republic of China in direct violation of President Truman’s orders.

The wave of Chinese soldiers that flooded south in response left thousands dead and wounded before the UN forces stopped the advance practically where the original border had stood, the thirty-eighth parallel. After two more years of skirmishes, the two sides finally agreed to an armistice, which is still in effect to this day.

Now foreign nationals can enter the front lines of this war that has lain dormant for 62 years. The USO organizes multiple tours a week. Within this area is the Joint Security Area (JSA) a patch of neutral ground for diplomatic meetings.

The tour costs approximately $85 (93,000 won) and will take visitors inside the third tunnel that North Koreans have tried to dig into South Korea, an observation point to gaze into North Korea, the meeting room that sits astride the official border, and a few other locations within the DMZ.

The tour begins at Camp Kim in Yongsan. After multiple passport checks, a bus takes the visitors to the military-controlled region near the DMZ. The ride takes about an hour. The first stop is the tunnel. In 1978, South Korean forces discovered the tunnel based on information from a North Korean defector.

The tunnel is approximately 1.7 km long and stretches several hundred meters across the border into South Korea. Visitors enter via a steep ramp that descends 73 meters underground. Cameras and photography are not allowed inside, but they will not make you leave your phone.

Published statistics state that the tunnel is two meters by two meters, but the taller visitors will attest that it is far smaller. On your way in, you will have an opportunity to grab a hard hat; take one.

While your group files through the jagged, dynamite-blasted rock, the occasional thunk and ensuing laughter will alert you each time a tourist stands up a little too high.

You will be allowed to approach the third and final steel barricade the South Koreans built to seal off the tunnel. A small window lets you see to the second barricade. However, you are still a few hundred meters shy of the demarcation line.

When all tourists have re-emerged from the tunnel, your guide will shuttle you back onto the bus. The next stop is the observation deck. Most of the flat ground you will be able to see is within the four-kilometer-wide DMZ, but all of the mountains in the distance are North Korean territory.

There are binoculars attached to the deck, which for a few coins, you can peer into the North Korean border villages with a bit more clarity. Off to the right of the building next to the observation deck, you’ll see a small temple. The small two-story building houses a Buddhist shrine on the bottom and a bell on top.

Those caring for the temple will not ring the bell until the country is reunified.

Before heading into the DMZ, the USO tour makes a stop at Dorasan train station, built to be the last stop before a proposed train route to the North. For 500 won (~$0.40) you can go out to the platform to see where trains may someday be picking up commuters bound for Pyongyang.

Inside the station is a map showing the connections to the Chinese rail system and the Trans-Siberian railroad. One day it may be possible to travel from Busan to Lisbon entirely by rail.

The next stop is Camp Bonifas, where a U.S. Army soldier will take over as guide. All tourists are reminded that photography on post is prohibited. From this point, the military members in charge will tell you what photographs you can take.

You will receive a briefing on the history of the DMZ and the significance of a few locations that the tour will visit.

The first stop is probably the main attraction: the Joint Security Area. This is the iconic location of the North and South Korean guards standing in strict military poses in a perpetual face-off. This may be the only time you will ever see a North Korean in person.

Across the slabs of concrete that mark the border, a lone North Korean guard stands at attention in front of his country’s guard pavilion. The tour will take you into the meeting room where diplomats from each nation occasionally meet.

Inside are two South Korean guards, unflinchingly standing at attention as much for show as for protection. You can photograph anything inside the building, but don’t be like me and point your camera outside. Also, if you want to cross to the northern side of the table, please do so on the side of the table opposite the soldier. It’s a matter of respect.

End of the tour

The remainder of the tour will be brief stops at watchtowers and other sites within the DMZ. Possibly the best location for viewing North Korea is the watchtower From here, you will clearly see the immense flagpole in the town the Americans have dubbed “Propaganda Village.”

On a windy day, the flag will be flying, but it takes a good breeze because this flag weighs over 700 pounds.

On the way back, you’ll get to see the “Bridge of No Return” where prisoner exchanges took place at the end of hostilities in 1953 and again after the USS Pueblo incident in 1968. When the prisoners reached the bridge, their captors offered them the choice to cross or stay, but their decision was final.

You will also get glimpses of the ironically named Freedom Village. As part of the armistice agreement, both nations are to maintain a village within the DMZ.

The residents of the Freedom Village live probably the most restrictive lives of any free citizen in South Korea. They have a daily curfew, limited services, and strict regulations on acceptable activity in the village.

However, they don’t pay taxes, and the crops they raise sell well at market, so residents do well financially.

The tour will make another stop at Camp Bonifas where you can get souvenirs and snacks before returning to Seoul. In all, the trip will take about eight hours from check-in to when you return.

Have you visited the DMZ in South Korea? Let us know your thoughts and experiences in the comments section below.