The Art of Small Talk on a Flight

It’s awkward, I know. But like it or not, those seatmates of yours are there next to you for the next few hours. What’s even worse than sitting next to one stranger is getting stuck in a middle seat and having 2 strangers sit next to for the duration of your flight. 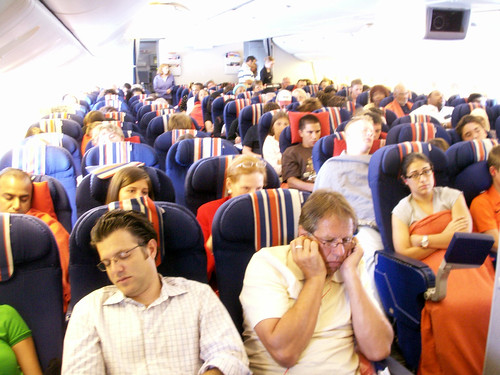 If you happen to be on an international flight, you’re going to be next to your seatmates for a long time. Might as well use the chance to strangers into friends, yeah? Making small talk on a flight is also great practice for people who want to work on their social skills.

Meeting people can be fun, so stop pretending that you’re asleep; turn off that stupid little tv in front of you (do you really need to watch The Walking Dead reruns for 10 hours anyway?); and turn to the person next to you to say hello while keeping all of these tips in mind.

People love to talk about themselves

Read any book on the art of conversation or persuasion and this is the first point they’ll shove down your throat. Want to know why? Because it’s true!

When I left Taiwan to go back to America, a seatmate of mine (a little old grandpa looking fellow) was reading a book for the first few hours with his eyebrows deeply furrowed, nodding his head every now and then as he silently agreed with the words on the page.

I had to know what the hell was so interesting. So, once it was dinner time, I put my book down, ordered a glass of red wine and asked him a simple question: Do you mind if I ask what you’re reading?

See also  The Art Of Slow Living In Taiwan

A few glasses of wine and an hour and a half later, we had both exchanged book recommendations; we learned about each others’ significant others (his wife is a little old woman in Ottowa who owns a bakery in case you’re curious); and we received quite a few angry stares from other passengers who are used to a no-talking policy between strangers on flights.

It was definitely one of the best flights I’ve ever had.

Look people in the eye

Another stolen tip from How To Win Friends and Influence People that is completely relevant to making friends on flights. I’m not saying you should be a creep about it – after all, there’s nowhere else to go if the person next to you is clearly uncomfortable because of the creepy way you’re staring into their soul.

Every now and again, though, as you chat, make it known that you’re engaged by looking at them in the eye.

The easiest way to get someone to like you (and want to chat you up as you’re thousands of miles up in the air) is to offer help when it’s needed.

I can’t tell you how many times a seatmate has saved me from breaking my scrawny arms as I try to lift my carry-on safely into the overhead bin. Although, to be fair, a few times my seatmates helped me because I was close to crushing their heads with my luggage.

Either way. The fact that they helped me made me take an instant liking to them and made me much more comfortable chatting with them once we were seated.

So, it’s getting late and you’re getting sleepy but you’re not sure how to end the conversation so it’s not completely awkward. What do you do?

For the sake of your mother who taught you social skills, I hope you chose C. (If you didn’t, I’m going to call her and tell on you. Looks like spankings are coming your way!)

And there you have it, folks: easy peasy tips for making friends on a long flight.

Calling all world travelers! Have you ever made friends with a seatmate on the plane? What was your experience like – was it an awkward exchange like a first Tinder date (So, uh, you like food?) or was it an easy breezy conversation? Share your answer with other travelers in the comment section below! (Don’t be shy! Start practicing your conversational skills now.)