Dealing With Bad Language in Class

If there’s one thing that all teachers abroad eventually learn it’s that kids will be kids no matter the country. Most people have this idea that children in Asia are kind, smart, and never, ever cause a lick of trouble. 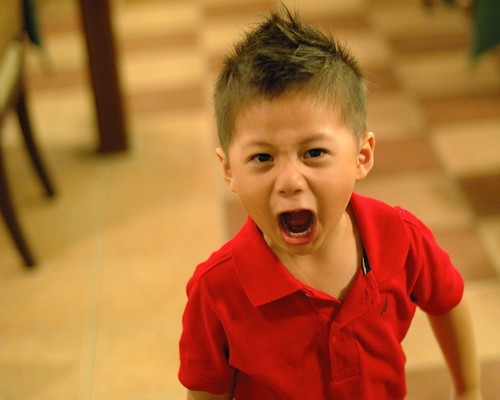 I’ll give you one good guess which of these qualities isn’t always true. If you guessed the last one, you’re right. Asia, just like any other country, has its little troublemakers.

Because of students’ cute little innocent faces, it sometimes comes to a shock to a teacher when bad behavior runs amok in the classroom.

The teacher in my neighboring classroom actually had a 4th-grade student look her in the eye and say, “Eff yo momma!” in Mandarin. After another student tattled on the naughty student, needless to say, all hell broke loose.

Luckily, after the initial shock, she handled the situation like a pro. If you happen to find yourself in a sticky situation with a kid that could use a good timeout and dunce cap, just take a deep breath and remember these tips. (But seriously, breathe. I know you’re upset, but you’re turning blue in the face.

Remain calm and stay in authority

This is not the time to start screaming at the kid or take the bad behavior personally. I’ve seen teachers who have sassed students right back, and all that does is give the kid the idea that it’s ok to argue with the teacher. It’s not. Keep calm. Breathe. Whoosa.

Deal with the problem right away

If the offense is something really awful like cursing, threatening, or extremely aggressive behavior, take care of the problem right away instead of waiting until the end of class.

See also  5 Ways Teaching is Like a Big Business

Some teachers will say not to do this because it causes a disruption, but I personally think if a student is creating a huge problem (like screaming “screw your mother” at an adult) they should be dealt with right away so that it’s understood rude behavior is not tolerated in class.

Speak to a native teacher, secretary, or principal

For behavior that needs to be addressed clearly, ask a native teacher to help you translate. One afternoon in Korea when I had an entire class of unruly students, I calmly left the classroom and returned with a native teacher.

I asked her to translate every word of my disappointment in their behavior and expectations for the next class. I never had to do that again – if there’s anyone that can set students straight, it’s native teachers in Asia.

If you’re going to talk to a parent, make sure a native teacher is present

Make sure that nothing is lost in translation or cultural differences by asking a native teacher or principal to be present during conferences or after school talks with parents.

If you do have to have a talk with a parent about a student’s bad behavior, always discuss this with your principal first so that they’re in the loop and can advise you.

Wipe the slate clean the next day

Once the problem has been dealt with, try to let it go. When a student is especially rude it can seem near impossible to avoid labeling them as the ‘bad apple’ of the bunch while keeping them at arm’s length, but remember that you’re a professional.

Often the kids that lash out need the most attention so try to be kind. Don’t take anything personally, and remember why you became a teacher: to teach students!

If one is acting up, teach him the right way to behave in class and how to love everyone – even the ones that make it so darn difficult sometimes.

Calling all English teachers in Taiwan! Have you ever had to deal with a student that was rude, mean, or unruly? How did you handle the situation? Tell us all about your grief, tears, and eventual triumph in the comment section below!