5 Obvious Differences Between Korea and Taiwan

If you’ve an avid reader of the wonderful Reach To Teach community blog, then you already know that I’ve given up kimchi and replaced it for stinky tofu. Although I’m not sure where I got the idea, I had idiotically assumed that the move from Korea to Taiwan would be a breeze. After all, they’re both Asian countries with Eastern cultures right, so how different could they be? I’m so embarrassed to even share that dumb thought with you, but it’s true.

I’m guilty of being a lazy traveler, and I take full responsibility (and any tomato throwing that comes my way). I didn’t exactly do my research before my big move as I was so dead set on “learning by immersion” when I arrived. Yeah, never do that, travelers. As my days are quickly turning into months here in Taiwan, I’m beginning to really notice small mannerisms and cultural quirks in my new residence, and I’ve come to see that South Korea and Taiwan couldn’t be more different than night and day…or kimchi and tofu. Sorry, I had to. The following 5 differences are what really strike me as fascinating between the two Asian countries.

In Korea, I always found it strange and uncomfortable to walk into a bar bathroom and instantly find myself enveloped in a suffocating cloud of smoke. Once my eyes became adjusted to the smokescreen, I’d realize that Korean girls were the culprits holding the cigarettes. Once they were done puffing away, they’d reapply their lipstick, spritz a bit of perfume over their hair, pop in a bit of gum in their mouths, and walk back out to the bar to rejoin their dates.

So, what’s the deal with all the secrecy? Women should be cute and soft in Korea. From their adorable peter pan collared dresses to their bubble gum pink lipstick, Korean girls are expected to portray a perfect feminine woman, which means no smoking since that’s for boys and no heavy drinking.

Taiwan is a whole different ball game. I was almost shocked as I walked the streets of the trendy shopping district of Dunhua in Taipei and saw so many girls puffing away on Pall Malls in broad daylight. There was not even an ounce of shyness in the women smokers of Taiwan.

Most of the time at work in Korea, I’d feel as though I were getting a stiff neck from bowing so often throughout the day. If a co-worker walked into the office, we’d bow. If I were leaving the office, I’d bow. When the cafeteria lady gave me extra fruit because she though I was too skinny, we’d bow. If the principal walked by me, we’d bow…..like a million times. I’m sure you get the point? Respect is valued above all else in Korean culture, and bowing is a way to express that respect you have for someone else.

In Taiwan, my shoulders are much more relaxed. I’ve witnessed and maybe bowed myself only a handful of times. While I do feel like there is a beauty in the level of respect Korea places on elders and honor, I truly enjoy being able to feel a bit more comfortable with the people I meet in Taiwan. To me, it seems more friendly and laid back to enjoy a conversation with a Taiwanese person and not have to strain my neck and back bowing so often.

By far my favorite thing about Taiwan I’ve experienced is that the culture is so open and accepting. Taiwan holds strong Taoist philosophies, which teaches followers to live in harmony. This influence in Taiwan allows many people to live lifestyles they prefer without fear of being cast out or persecuted. As a result, the flow and energy of Taiwan is extremely open allowing believers of many religions to practice openly and the LGBT community to be comfortable in public without being frowned upon. (I even went to my first Drag Show in Asia in Taiwan, and not a single person even batted an eye!)

Korea, on the other hand, is a much more reserved country. While the younger generation is slowly becoming more vocal and open about striving for acceptance for different races, cultures, and communities, there is still much more time and work that must be involved before Korea as a whole changes its conservative views.

Expat couples who love sharing public smooches and embraces should definitely apply to teach in Taiwan because those little acts of affection aren’t cute to Koreans. In fact, they’re quite scandalous to older ajummas (old Korean grandmas) and ajushis (old Korean grandpas).

When I was a bitter singleton in Korea, I loved that no one was allowed to show affection passed hand holding in public because it made me sick to my stomach and green with envy. Now that I’m in a stable relationship with a former expat, though, I’m pretty happy to be in a country that will allow me to plant kisses all over my partner’s forehead when he visits in December! 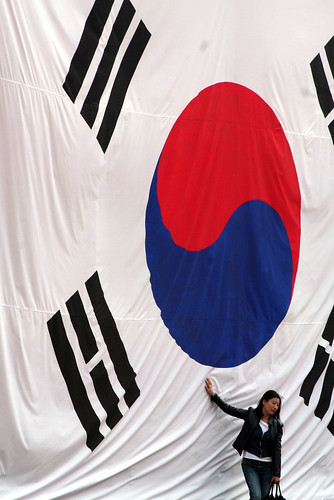 Every country has its preferred national pastime. America enjoys baseball. Mexico loves soccer, and Korea chooses drinking. Kidding…sort of. In Korea, day or night, it never failed that I’d see someone slumped over a sidewalk with that blank expression (and sour smell) that gave away their drink of choice for the last couple hours. Soju. The strong rice wine is actually cheaper than a bottle of water and is the most popular alcoholic drink sold in the country.

Although Taiwan has a cheap liquor that is the equivalent of soju, I’ve hardly seen the amounts consumed in the land of stinky tofu that I witnessed being binged on in Korea. I won’t lie and say I’m sad my soju soaked nights are far behind me, but I am incredibly happy every morning in Taiwan without a murderous soju headache, which I’m nearly positive is the equivalent of water board torture or worse. Soju hangovers are seriously that horrible.

To read more on cultural differences in Korea check out my article The 10 Cultural Differences that still shock me. Happy travels!