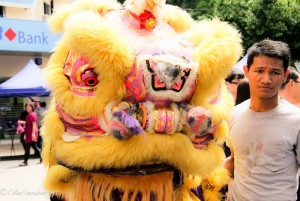 Chinese New Year, also known as the Lunar New Year, is celebrated throughout the world, but has its traditions rooted in both China and Taiwan. This holiday marks the coming of the New Year according to the lunar calendar, which was used throughout much of Asia until the 20th century.

Like most Chinese holidays, this one centers around two main themes: family and food. Every Chinese holiday has foods that are closely associated with it, and Chinese New Year is no exception. The main dish, found in nearly every house, is a variety of dumplings (jiao zi).  These are thin flour based wrappers filled with anyything from meat to seafood to vegetables.  They can be boiled or fried. It is believed that by eating dumplings, you can ensure a prosperous New Year.

Another commonly seen event is the passing of red envelopes (hong bao). These envelopes are stuffed with money. Children give them to their parents, parents to the children, and even nieces and nephews are expected to be given a red envelope. The tradition around who gets a red envelope from who is extremely complex! In some instances, giving one to someone elder can be seen as an offense; yet in other cases, not giving one is also a big no-no. Luckily, as a Western teacher, you won’t be expected to give an envelope to anyone-ignorance truly can be bliss.

One final commonly seen event is the playing of a “card” game called Ma Jiang (also called Mah Jong, among other spellings). Families play from after dinner through midnight, and often into the morning.  It is thought that playing Ma Jiang at this time will bring good fortune for the New Year. Many families play throughout the week, though it’s more because they love the game than to increase their fortunes.

Ma Jiang uses a “deck” of 136 tiles, instead of cards. Like the classic card game Rummy, a suit needs to be collected by the player and laid out for the other players to see. The first person to place all of their tiles on the table wins! But it’s not as easy as it sounds-tiles can be placed in sequence of numbers or in groups of three with the same number and suit. Knowing what has been played will test the memory.  Learning how people play and guessing what they might be holding are advanced skills held by people who have been playing for years. You can find details of the game at http://en.wikipedia.org/wiki/Mahjong

Ma Jiang is not an easy game for non-Chinese speakers to learn, as there really are no English equivalents to many of the terms used. Additionally, many of the tiles use Chinese characters to express suits. However, with a bit of hard work and determination, this game can easily be learned by those who are used to card games from their home country. If you are not really a card-playing type, then observing may be best!

Hearing about Ma Jiang intrigues some and makes other desire to do nothing but take part in the delicious food! Regardless of how you decide to spend your Chinese New Year, take the time to ask your coworkers and friends how they spend their time-and if you get an invite, take advantage! This is one of those unique opportunities to get a first-hand glimpse into what is usually a very private part of Chinese culture.