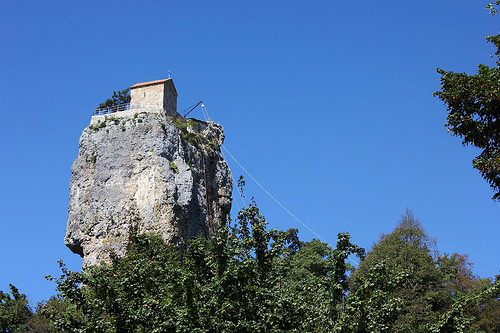 About 10 miles from Georgia’s small town of Chiatura, the Katskhi Pillar juts upward from verdant green hills. At nearly 140 feet, this towering monolith is a marvel in itself—but more remarkable still is the ancient church sitting at the top.  Known as Chiatura Church, this ancient stone structure has overlooked the hills of Imereti province for over a thousand years—and it continues to have a place in Georgia’s culture and religion.

Bbefore Chiatura Church was built, it is believed that the pillar was an ancient site for pagan rituals. When Christianity took root in Georgia, a group called the Stylites took over the pillar. Stylites were Christian ascetics who prayed, preached, and often lived for years at the top of pillars.

The Katskhi Pillar provided a perfect natural site for their ascetic lifestyle. Sometime between the 6th and 8th centuries, they constructed Chiatura church atop the pillar. Ancient, weather-worn stones provided some shelter and comfort for the devotees living atop this natural monolith.

Since the 15th century, the Stylite’s spiritual lifestyle has nearly died out. The Chiatura Church, however, provides one of the last sites where this type of pillar-dwelling asceticism is practiced. An Orthodox Christian monk named Father Maxim began restoration of the church in the early 1900s, and has been living at the top of the pillar for some years. Apart from volunteers and the growing number of tourists who come to the site, his company at the top is the bones of a former inhabitant.

Getting to the top isn’t easy. From the small cluster of stone buildings at the base of the pillar, it’s a long and daunting climb up.  Sturdy wooden scaffolding takes you halfway. Once the scaffolding ends, there’s only a narrow, rusty ladder.    When things need repaired or rebuilt, pulleys and ropes drag the building materials inch by inch up to the top of the pillar.  Volunteers occasionally haul materials and supplies up the ladder, to keep the church in good condition.

Chiatura church is a marvel found only in Georgia—and it’s only a short trip from Georgia’s second-largest city, Kutaisi. Learn more about The Republic of Georgia with Reach To Teach’s extensive Travel in Georgia guide.