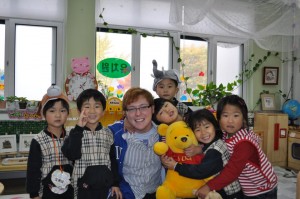 Raymond Revnyak is a Reach To Teach teacher currently living in Chungju, South Korea. Raymond traveled to South Korea to teach for EPIK, a prestigious education organization in South Korea that places foreign ESL teachers in public schools located across the country. He hails from North Carolina, USA, and this is his first time teaching or living abroad. Raymond has been kind enough to spare some time for us to tell us a bit about his first three months in South Korea and share his thoughts on his experiences with EPIK.

RTT: Hi Raymond. Thanks so much for taking the time to answer some questions for our readers. What are some things that you think new teachers should bring with them to South Korea?

RR: First, you need an open mind. As you’ve heard a million times already, be flexible, open, and all that other clichéd BS. It’s all true—every last bit of it. If you aren’t ready to eat strange foods (such as beetle larvae and congealed cow blood served in a block or pig’s head, for starters), see strange things (I once saw a kid bound hand and foot by string to a street sign as a form of discipline, and OK, this wasn’t just your everyday ball of yarn-type string, this was heavy-duty stuff), and do strange things (jimjilbangs, for example, but I won’t spoil this one), then Korea probably isn’t for you.

Two things that fall into the category of material objects:

See also  Resource List for Teaching the Past Perfect Tense

RTT: What have been some of your most surprising/pleasant experiences while in South Korea?

RR: See my answer above for a few of the surprising/strange ones. As for the pleasant stuff:

Being given a tour through the KBS (Korean Broadcasting Station) building in Seoul, and being treated to a delicious meal in the building’s basement restaurant, before being asked to sit in the third row for an hour-long bleed-from-your-ears-from-all-the-preteen-screams K-Pop concert for the filming of KBS’ Music Bank, and seeing fireworks over Seoul—all as part of a day at work.

Having my coworker tell me in perfect English that she’s pregnant.

Korean Field Day. You all remember Field Day, don’t you? From elementary or middle school? Wherein you probably ran around the playground screaming and cart wheeling your way from capturing the flag to water balloon wars, and just enjoying a day off from classes. We celebrated HanSong’s Field Day on the 28th of September and it was a completely different (and all around better) experience than anything we know and love about American Field Days—basically a town-wide festival, with, I think, all of Songgye (my school’s town) in attendance. The highlight here was turning to a co-worker at around 11 AM, and inquiring about his red face only to find out that he was totally, shamelessly drunk. Would I like to join him? What followed was a—trust me on this—blur of a day, complete with my forced participation in a race around the track (I say “track” but really, I mean a dirt lot in the center of the school’s grounds with crude white lines drawn around the perimeter, which is just plain endearing) against my middle 3rd graders, having my caricature drawn by a not at all unattractive artist from a visiting university, teaching Mr. Kim and two of the other administrative officers how to play Flip Cup (with soju), meeting and having my hand wrung by a local politician—there to solicit votes no doubt—and, finally, being treated to a delicious Korean barbecue.

See also  5 Reasons You’re Not Too Old To Travel

Experiencing my birthday in Korea was an altogether pleasant experience. My co-workers surprised me with a cake, flowers and this truly remarkable giant chocolate pastry roll thing (Think of a Swiss Cake Roll that can feed twenty and you’re caught my drift). This quickly led to pictures with the staff and a procession of my students bringing me these wickedly sweet little pictures, gifts, and notes. And that is not even mentioning the great packages from home, both of which were wonderful. I’ve still got a sufficient stockpile of Reese’s and other assorted American junk foods to get me through the upcoming winter. My birthday was made additionally memorable by not one but two weekends spent with friends, the first with those that I met at Orientation, and the second with Jeremy, Malia, and Stephen, newly arrived teachers at my school. Both weekends involving good portions of samgyeopsal (thick slices of pork belly cooked to crackling, mouth-watering perfection over a grill at the diners’ table), beer pong, soju, and dancing.

RTT: What was Orientation like? Did you find it helpful?

RR: I’ll say this: All of the lecturers were enthusiastic, kind and full of useful advice. I tried to cram it all in while also meeting the other teachers, but really half of the material covered was case-specific stuff that you learn during your TEFL course.

Overall, the whole orientation thing was a mixed bag. I’m glad, actually, to be rid of it now because despite some really great lectures (the only invaluable part of the week-long forced dorm-tenure), orientation basically amounts to the first week of college, all over again. Except instead of sticking to the dorm for a year, everyone leaves their new “friends” behind and heads off for different corners of the country.

Get what you can out of Orientation (learn some Korean, really listen to some of the horror stories [they’ll prepare you], and note websites that will eventually be indispensable [you’ll know them when you hear them]), but don’t expect to have the best experience of your life. That comes later.

RTT: What would you say to prospective English teachers with an eye on South Korea?

RTT: How do you like working with a Korean co-teacher? Do you have any tips for other teachers?

RR: There’s only one tip that anyone can give you for this one. Be prepared for anything and everything. You could have a co-teacher that doesn’t help you at all, or you could have one that truncates your role in the classroom down to standing in a corner for three-fourths of the lesson (and doing pronunciation drills for that other fourth).

My co-teacher is just as unique as anyone else’s is going to be. He doesn’t help me during classes other than to translate something when it’s absolutely necessary, he has me write up all of our middle school midterms/finals (and the answer keys, and the speaking tests), and he has me turn in all of my lesson plans a few days early. So what’s happened is that my lessons have turned into pseudo-college-style lectures, wherein I have total creative freedom in the classroom, which can be difficult sometimes and refreshingly engaging at others.

Just be ready for anything.