School variety is something I am used to, I was first informed I would be teaching at two schools in Daejeon the last day of my EPIK orientation. I was excited because I would have a split schedule and experience in a number of different school settings. 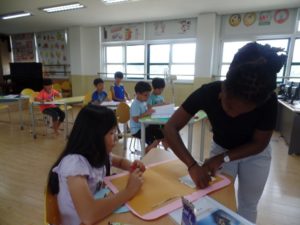 I was assigned a city school and a country school. I was thrilled about my country school because I wanted to be exposed to authentic Korean culture. I assumed my city school would be very modern and somewhat westernized. All of my presumptions were proven wrong when school started and the reality of my life as the English native teacher began.

My city school is an easy 10-12 minute walk from my apartment. The walk to school is filled with high-rise buildings and bustling traffic. Usually, when I arrive at my school the students are outside running around, expending their energy before class.

Depending on the seasons the hallways can either be very cold or really humid. The administrators are big on conserving energy. It was quite an adjustment, getting used to the ranging temperatures within the school building.

One of the things that surprised me the most was not having a separate English classroom. In America, I was used to there being separate classrooms for each subject. My assumption about my city school being westernized was not my reality.

English class was held in my students’ homeroom class. At first, I thought it would be a hassle, but, after a while, I got used to it. The students at my city school are obnoxious at times, but not out of control. They come prepared for class (for the most part) and usually complete their homework. I have two Korean co-teachers that lead the class alongside me, so classroom management is not usually a big issue.

My country school is surrounded by farmland, livestock and beautiful, serene mountains; it’s a twenty minute commute by bus. On Tuesday’s and Friday’s, I head to work  at 7:30 am, in order for me to get to school on time. The bus I take comes every two hours, so if I miss the 7:30 bus, I’m pretty much going to be late to school.

One thing that both schools have in common are the ranging temperatures within the school building, meaning the hallways are either freezing  cold or extremely humid.But, other than that, my country school is very different.

There is a separate English classroom, but it’s often being used for other events other than English class. Most of the time English class is held in the computer room. The students are very artistic, musical and dramatic. In many ways, my students’ creative abilities work really well with learning English.

However, my class has been more trial and error these past several months. I’ve gotten better at targeting their interest areas and captivating their attention, but I still have A LOT to learn. I’m not as fortunate to have Korean co-teachers at my country school. I teach my classes on my own, which was very unsettling at first. But, as time passed, I’ve gotten used to it.

Not what I expected

My assumption about being exposed to authentic Korean culture at my country school has proven to be true, but not in the way I expected. I initially thought I would witness Korean traditions and festivals. Although they do happen, because of my split schedule, I often miss the festivities.

However, I’ve learned a lot of agricultural skills from my country school, which is essential to Korean culture, especially in the country. My greatest pastime with my colleagues became learning about the school garden and picking vegetables. Never did I think teaching English in Korea would include gardening.

Over time, I have learned it’s never a good idea to assume. It’s far better to learn how to embrace the strangeness, uniqueness and the beauty of my two differing schools. Once I was able to grasp that concept, I was able to grow in both environments and be receptive to what it had to teach me.

Have you had experience teaching in different kinds of schools? What contrasts did you notice whilst working at different schools? Let us know in the comments section below. 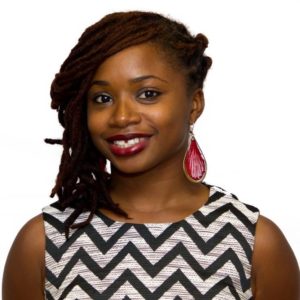 Willynn taught in the education field for three years. It was her curiosity and interest to see the world from a different perspective that lead her to Daejeon, South Korea. Willynn is currently working with young learners teaching English for EPIK in South Korea. In her free time, Willynn loves to go on adventures with her husband, Micah, engage in language exchanges at coffee shops with the locals in her community. As well as participate at Open Mic events across Daejeon and Seoul sharing her spoken word pieces. Follow Willynn on Youtube  or on WordPress.