Make the Most of a Weekend in Japan

If you’re like me, you’ve taken a job teaching English in Korea for much more than just teaching English! South Korea is in an excellent location to make short trips to other countries. Flights that would feel like short domestic hops in the United States, Canada, or Australia will put you in very different countries.

Recently, I used a long weekend in Korea to travel to Japan, a destination also easy to access from China and Taiwan. With cheap flights readily available (Peach Airlines is probably the most popular), a few days is well worth the trip. Here are a few pointers on capitalizing on the opportunity.

First of all, you’ll need to decide what you want to see most. The cheapest flights will take you into Osaka-Kansai. Indeed, Osaka and Kyoto (a 30-50-minute train ride from each other, depending on the line you take) are chock-full of cultural heritage sites.

Tokyo is one of the largest cities in the world and is the world capital for all things gaming. It’s also a booming metropolis with futuristic technology and an incredible number of people crawling its streets.

I decided to visit Osaka and Kyoto both for the price and the historical focus Click To Tweet. There were far more locations than I was able to see, but here are a few that I particularly enjoyed.

This massive wooden structure sits aloft in the mountains overlooking Kyoto. First established in 778, the temple has been rebuilt multiple times. The current structure dates back to around 1631 in the early Edo period. Currently (fall 2015) one of the buildings is under renovations.

The main hall, though, is fully open and occupies a place among UNESCO’s cultural heritage sites. The Kiyomizu stage, prominently perched on an engineering wooden masterpiece of a frame, provides an excellent view of the natural beauty of Japan and the sprawling city below. Kiyomizu directly translates to “clear water,” and you can taste this water at the fountain of feathers.

The three fountains represent three types of fortune: health, longevity, and wisdom. It is customary to drink from only two, as hoping for all three is considered greedy. In the temple, there are a series of vendors selling good luck charms and other souvenirs. Much of the temple is built around good fortune. Up a flight of stone steps, you will find a pair of rocks that could determine your romantic fate. The idea is to walk from one to the other with your eyes closed.

If you are successful, a happy relationship awaits you; if not prepare for years of heartache! Around the temple, there are many walking paths and natural areas to explore. The scenery is incredibly beautiful and makes for a perfect location for amateur photographers like me.

To get to the temple, you can take buses 100 or 206 from Kyoto station and get off at Kiyomizu-michi or Gojo-zaka. The entire area around Kiyomizu-dera is full of souvenir shops and other interest sights. Walk north from Kiyomizu-dera, and you are bound to run into plenty of other shrines, temples, and natural areas. 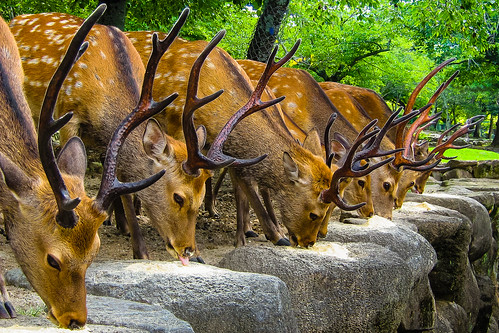 Nara is a lesser-known city to the east of Osaka. By train, it takes about 45 minutes from Kyoto on the JR line to get to the JR Nara station.

The first attraction on your list should be the deers. There are literally hundreds of deer ambling all about what has affectionately become known as “deer park” (more often known as Nara Park).

They will greet you almost as soon as you emerge from the subway. As you walk toward the park itself, you will come across a handful of food stands selling crackers.

These crackers are not for you; they are for the deer. The deer will pursue you if they sense that you have something edible, but I didn’t witness any cases of the deer being unfriendly. Watch out for what may be sticking out of your pockets because they seem to be just as attracted to tour maps as they are to crackers.

The first site I visited was the Todai-ji Temple (admission: 500 yen), an enormous pagoda that houses a 53-foot tall bronze Buddha figure known as the Daibutsu.

You will be guided into the pagoda, where the eminent figure will reveal itself as your eyes adjust to the dim light inside. The path circles around back where there are a series of other statues, figures, and souvenir vendors.

Up the road from Todai-ji is the Kasuga Taisha shrine. One of the few sights that looks as old as it is, this ancient forest is bisected by dirt paths lined with stone lanterns.

Twice a year (early February and mid-August), the lanterns are lit in a night festival and illuminate an already eerie meandering through the forest. In the middle of the park is the real attraction, the shrine itself.

The shrine was rebuilt many times throughout its history, but the current structures date back to the end of the Edo period. The outer areas of the park are open, but viewing the Kasuga Taisha shine will cost 500 yen. 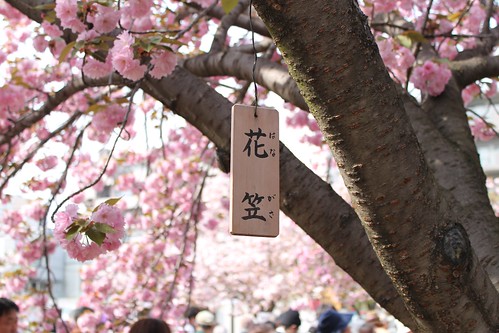 Because I was flying out of Osaka, I saved this stop for last. There are several worthwhile sights here, but the most popular is probably Osaka castle, which sits at the center of a massive park in the middle of Osaka.

The castle consists of the main tower and a dozen smaller structures. Construction on the original towers began in 1583, but the main tower burned down after a lightning strike in 1665.

The current main tower was rebuilt in 1931 after centuries of neglect. Surrounding the main tower are the Nishinomaru gardens, a wide expanse of grass and home to nearly 600 cherry trees.

This area is very popular in early April when the cherry blossoms are in bloom. Entrance to the main tower will cost 600 yen, and entrance to the gardens will cost 200 yen.

Another place you should be sure to visit while in Osaka is Shinsaibashi and the areas around Namba station. In Shinsaibashi, you will find the largest shopping center in the area.

A block off the main thoroughfare, Mido-suji Street, at Shinsaibashi station, you will notice that you have come under a high vaulted roof. Along this strip, usually teeming with shoppers, you will find every kind of shop from food to apparel to sporting goods.

Though the goods are modern and cosmopolitan, the area dates back almost 400 years as a shopping district. Many of the world’s top brands can be found here. If you get hungry, you can easily find a large selection of local diners along any of the side streets.

Though I had less than 72 hours in Japan, I feel like I was able to see an incredible amount of the country. I’m sure that there is far more, but these were more than enough for a short jaunt across the sea.