Taipei’s Dragon Boat festival attracts people from all over Asia to observe the celebration. During the festival one can find themselves surrounded by various foods, activities, games, and, not to mention, the spectacle of over 212 dragon boats, all with various colors and designs, competing to see who’s the fastest. 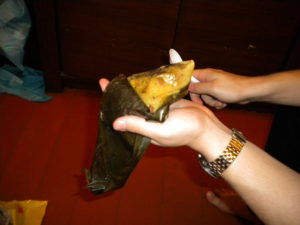 This year the festival will be held June 9th-12th at Dazhi Riverside Park. The event will be fun for the entire family as the park will be transformed into a smorgasbord of stalls that are providing arts and crafts for children and adults alike.

These stalls will allow visitors to experience some of the traditional celebrations of the Dragon Boat Festival such as: making Zongzi (covered later), balancing eggs, making craft dragons, as well as other fun activities! Of course, like in most Taiwanese celebrations, there will be plenty of delicious Taiwanese food stalls as well.

The Dragon Boat Festival is one of the longest running Chinese traditions and festivals other than Chinese New Year. The following will detail some of the special events and history of the event.

The Dragon Boat Festival’s history began over 2,100 years ago in China. The story begins with a poet named Qu Yuan who lived during the Warring States period of the Zhou Dynasty in China that lasted from 475 BC to 221 BC.

He was a high-ranking official in the Chu royal house who disagreed with the king’s alliance to another dynasty, the Qin. This led to his eventual exile from his beloved home and state.

More than twenty years later Qu Yuan discovered the Qin had conquered the capital of Chu, his hometown. In despair for the love of his birthplace and disdain for the corruption of the Qin he drowned himself in the Miluo River as a ritual protest.

The villagers raced out in boats to try and save Qu Yuan, but it was too late. They quickly threw balls of sticky rice into the river for the fish to eat instead of Qu Yuan’s body.

There are many different variations of this story, but they all relate to Qu Yuan sacrificing himself to protest the corruption of a country that led to the destruction of his hometown. His sacrifice then led to the yearly tradition of throwing food, mainly Zongzi, into the river to symbolize the people’s’ respect for Qu Yuan.

Food of the Dragon Boat Festival

The most traditional and popular food for the festival are Zongzi, a traditional sticky rice dish made specifically for the event. In addition to the rice the dish includes a few different fillings: mung beans, red bean paste, Chinese BBQ pork, Chinese sausage, pork fat, mushrooms, peanuts, chicken, and other yummy ingredients.

Of course, there are many different variations on the dish and not all ingredients are used together with every Zongzi. Furthermore, different areas of China and Asia will have different spins on it.

Another common food for the festival is Jiandui or Fried Cakes. It’s made of a fried round cake and rice flour with something to sweeten them. Since the Dragon Boat Festival falls on the rainy season in some parts of China, people believed there were holes in the sky where rain would continuous fall. Long ago, it was believed these small cakes could fill those holes in the sky.

Other foods common to the festival include: eggs, thin pancakes, glutinous rice cakes, and eel.

The most common practice during the Dragon Boat Festival is, of course, racing dragon boats. Coming from the history of trying to save Qu Yuan from drowning it has evolved into a state competition and very serious sport.

Taipei will host a very large competition, at Dazhi Riverside Park, for countries from all over Asia that will span over three days. The winners will take home some serious cash prizes and fancy trophies.

Eating food is another major part of any Chinese festival and this one is no exception. The park will host a variety of different food stalls.

Since the festival is targeted at all age groups, children will also have a chance to tear away from their parents to have some fun (supervised, of course) themselves.

This is going to be a festival you really don’t want to miss!

Have you been to dragon boat festival? Perhaps you went in a different country to Taiwan. We want to hear about your experiences of this wonderful festival. Let us know in the comments section below.