Reasons to Love the Taipei MRT

There are many reasons to love the Taipei MRT system, its convenience and cleanliness make it one of the most efficient and enjoyable transportation systems I have ever ridden.

Think about escaping into the mountains for a few hours, then going to sit in a hot spring, then after you’ve thoroughly increased your body temperature, taking a boat ride across a beautifully lit harbor, and finally, to finish it all off, you want to change your perspective a little, say, perhaps, on the 91st floor of a building. The Taipei rapid transit system, more popularly known as the MRT (Mass Rapid Transit), makes all of this possible.

Established in 1996 the MRT has expanded the accessibility of Taipei City and it’s surrounding areas. It provides transportation in Taipei to thousands of people every day with an alternative to the hectic street traffic that pervades large metropolitan cities.

Plans to be a rapid transit system in Taipei began as early as the late 1960’s, but was halted because of other pressing concerns. The conversations picked up again in the 1980s and the first line was built in 1996.

Since then the city added four more lines, making a total of five, with more than 117 stops. Take a glance at the Taipei metro map and there is no way you would think there are 117 stops, but trust me, there are…I counted.

The lines connect the areas of downtown with the outskirts of Taipei and New Taipei City. This affords people the opportunity to live in quieter, cheaper rural areas of Taipei while still being able to commute to the inner city.

Without going into too much detail in this introduction, I will get into the top reasons to love Taipei’s Mass Rapid Transit. In doing so, we can also take a glimpse at life in Taipei.

Of course, this reason needed to be number one. The MRT connects various parts of the city together, making it incredibly easy to get around. Not only this, but the cost to ride it is minimal. Depending on the distance it ranges from 20 NTD to 65 NTD, but a typical ride within Taipei City will cost under 30 NTD.

The northernmost stop on the MRT is Tamsui, located on Line 2, or the Red Line, and is far removed from the city center. It’s located along the Tamsui River in the northwest of Taiwan. From Tamsui you can take a boat over Fisherman’s Wharf, an area well-known for it’s wonderfully illuminated “Lover’s Bridge,” beautiful sunsets, and delicious seafood.

From here (the top of the Red Line) take Line 2 all the way to its southernmost stop and you will arrive at Xiangshan (Elephant Mountain). This mountain is easy to hike and provides an absolutely stunning view of Taipei 101 and is one of the best places to watch the sunset in Taipei. And this is just one of the five lines and two stops on that line! Imagine what the other 115 hold!

Additionally, Taipei Main Station, the hub of the MRT, links the Taiwan Railway Association (TRA), the Taiwan High Speed Railway (THSR), and the metro system. From Taipei Main Station you can easily find your way to almost anywhere on mainland Taiwan (there are a host of small islands that are not accessible by train). The only other city in Taiwan to have such an in-depth metro system is Kaohsiung, but their system is not as widespread as Taipei. 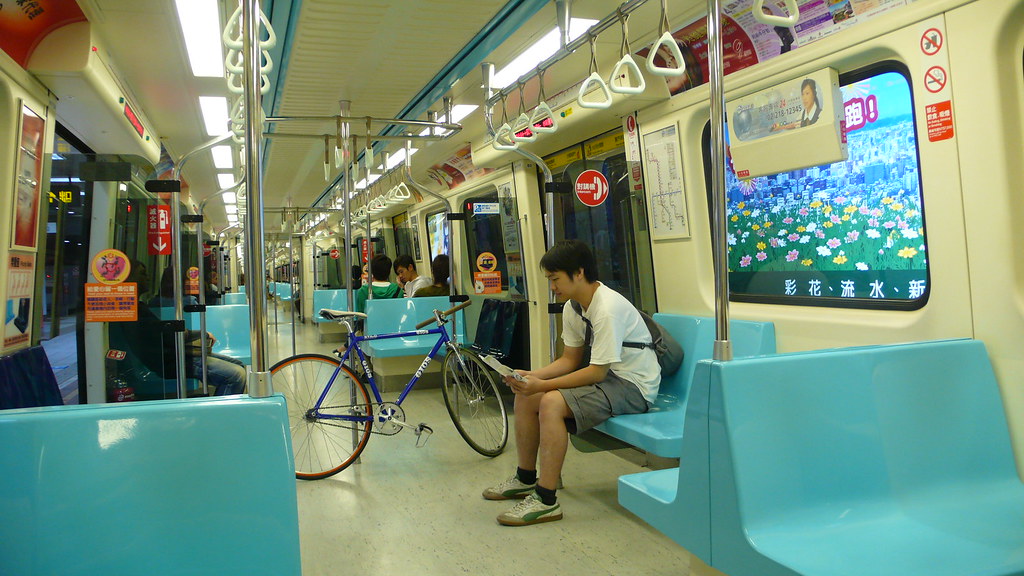 Other than being super convenient, the MRT looks cool too. Many of the stations adorn works of art or public messages. Some stations have artworks from local schools or advertisements for plays and shows happening in the area.

Just recently a large installment was placed in a popular station detailing the history of Taipei Rapid Transit. The installation includes a to-scale model of a subway car and designs of the various lines.

These types of installations will also change every couple months, always adding a sense of excitement to public commuting. When Star Wars VII came out they had a rotating TV that played the trailer on loop and would spin when an important action happened! Spin, I say!

Even the subway car that leads to the Xinbeitou, the stop closest to the hot springs, is designed like a mountain hot spring resort. Some other railway cars will also have designs on them ranging from popular cartoons to organizations advocating an event or fundraiser.

This one I’ve been discussing throughout the article, but it deserves it’s own section. The MRT’s ability to link a majority of the famous areas in Taipei together really allows the city to blossom and helps the tourism industry tremendously. Frequently, you can find people holding metro maps, speaking various unknown languages, and trying to find their next destination.

However, some destinations are not easily accessible by the MRT, such as: The Imperial Palace Museum, Yangmingshan National Park, the beach, and Yehliu Geological park, to name a few. The MRT will get you pretty darn close though and then a short bus ride can take you the rest.

The ease of access and the ability to quickly navigate the lines and stops of the MRT truly make it user-friendly. Coming from a guy who had to navigate the Japanese metro system, on multiple occasions, the Taipei MRT may as well be elementary arithmetic.
These are, but a few reasons to love the MRT and to love Taipei. Not only does the city have an irresistible natural charm, but that charm is easily accessible! So, what are you waiting for!