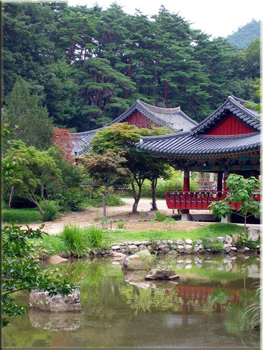 South Korea has a long history that dates back thousands of years, much of which has been dominated by Korea’s relationship with it’s powerful neighbors, China and Japan. In fact, it has been Korea’s strategic position between these superpowers that has shaped much of the history of East Asia and will continue to do so in the future.

??- 57 BCE: Evidence of inhabitants in Korea from as early as 4000 BC exists in Korea. Legend has that the man-god Tan Gun founded the Joseon (meaning Land of the Morning Calm) Kingdom in 2333 BC. Almost no centralized communities existed from then until three kingdoms emerged in the 1st century BC.

57 BCE – 668 CE: The Three Kingdoms of Silla, Goguryeo, and Baekje had similar ethnic and linguistic backgrounds. Koguryo occupied the northern part of the peninsula from the Chinese border to the Han River, while Silla and Baekche dominated the southern regions. All three kingdoms were heavily influenced by China, and Buddhism was introduced to Koguryo in 372. Various alliances were formed either with or against the Chinese until 660 when Silla allied with China to overthrow Baekje. Goguryeo fell shortly afterwards in 668.

668 – 935: The Silla Kingdom period marked the start of Korea’s cultural development. Buddhism expanded and furled the construction of numerous temples and art works. However, despite Chinese influences, Silla remained largely tribal in culture. Society divided into distinct classes with a large semi-slave population supporting an aristocratic minority. Warlords began amassing power bases to the north and eventually took over Silla and founded a new kingdom- Goryeo.

918 – 1392: Korea’s English name was derived during the Goryeo period. At this time the government codified the laws and introduced a civil service system. During this time Buddhism flourished and spread throughout the peninsula. Like other kingdoms before it, Koryo was also subject to internal strife and external threats, most notably from the Mongols who had taken over China. In 1231 the Mongols invaded Korea, forcing the royal family to flee to Kanghwa Island near Seoul. After 25 years of struggle, the royal family finally surrendered. The following 150 years saw continued Goryeo rule, but under the control of the Mongols. As the Mongols declined in power, so too did Goryeo. In 1392 a Korean general, Yi, Song-gye, was sent to China to campaign against the Ming rulers. Instead, he allied himself with the Chinese, returned to overthrow the Korean king, and setup his own dynasty. During this time, Korea also perfected the art of celadon pottery. 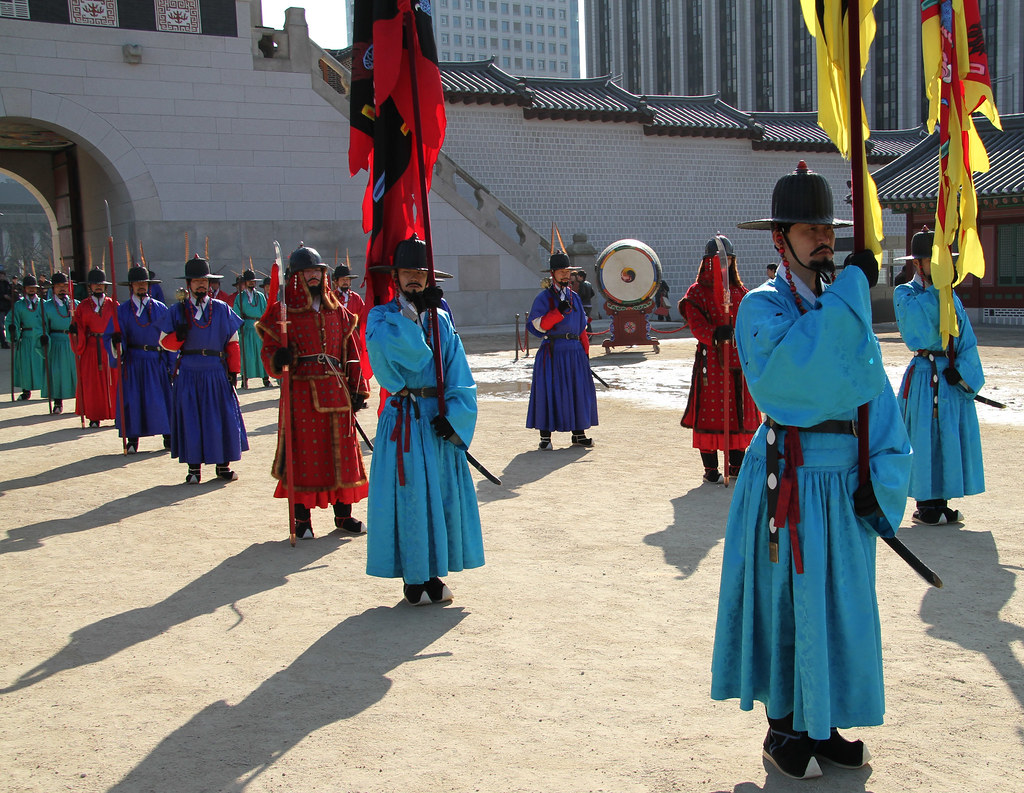 1392 – 1910: The ruler of the Yi Dynasty (also known as the Joseon Dynasty) moved the capital to Hanyang-gun (today’s Seoul) in 1394 and adopted Confucianism as the country’s official religion. As a result, Buddhists lost much of their wealth and power. It was during this period that the Korean alphabet, Hangeul, was invented by King Sejong the Great. This period also had its share of external problems, suffering invasions by the Japanese (1592-1598) and the Manchus (1627-1636). With the arrival of Japanese and Western traders in the 19th century, the Korean rulers tried to prevent the opening of the country to foreign trade by closing the borders, earning Korea its nickname of the Hermit Kingdom.

Beginning in 1876, the Japanese forced a series of Western-style trade agreements on Korea, leading to Japan’s eventual annexation of the country in 1910. Due to growing anti-Japanese sentiment, in 1897 King Kojong declared himself to be emperor of the Taehan Empire, an independent Korea. However, during the Russo-Japanese War (1904-1905), Japanese forces moved onto the peninsula, despite Korean declarations of neutrality. The signing of the Japan-Korea Protection Treaty in 1905 gave Japan virtual control over Korea, and in 1910 a Korean royal proclamation announced the annexation by Japan.

1910 – 45: During its occupation, Japan built up Korea’s infrastructure, especially the street and railroad systems. However, the Japanese ruled with an iron fist and attempted to root out all elements of Korean culture from society. People were forced to adopt Japanese names, convert to the Shinto (native Japanese) religion, and were forbidden to use Korean language in schools and business. The Independence Movement on March 1, 1919, was brutally repressed, resulting in the killing of thousands, the maiming and imprisoning of tens of thousands, and destroying of hundreds of churches, temples, schools, and private homes. During World War II, Japan siphoned off more and more of Korea’s resources, including its people, to feed its Imperial war machine. Many of the forced laborers were never repatriated to Korea. 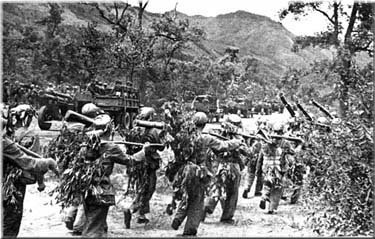 1945 – 60: The Japanese surrender on August 15, 1945, cause the peninsula to came under divided rule: the USSR occupied Korea north of the 38th parallel, while the U.S. occupied the southern section. Under UN auspices, a democratic government established the Republic of Korea (South Korea) in 1948 with its capital in Seoul. The Communists established the Democratic People’s Republic of Korea (North Korea) with its capital in P’yongyang. On June 25, 1950, the North Korean Army invaded the South, starting the Korean War. UN forces helped the South while Communist Chinese volunteers sided with the North, resulting in a three year war which left millions dead on both sides. Student protests against the corrupt government caused Syngman Rhee to step down as president in 1960.

1961 – 79: On May 16, 1961, General Park, Chung Hee organized a military coup and toppled the civilian government. He then established martial law and later had himself elected president. Though his leadership was oppressive, President Park instigated many economic and social changes that helped elevate Korea into and industrializing nation. Major infrastructure enhancements, including the Seoul-Pusan expressway and the Seoul subway system, began under his regime. The Korean CIA chief assassinated President Park on October 26, 1979.

1980 – 87: In the power vacuum left by President Park’s death, General Chun, Doo Hwan staged a military coup and seized power on May 17, 1980. After re-establishing martial law, he had himself elected President and banned several hundred former politicians from campaigning. A military crackdown against student protests in the southern city of Kwangju resulted in hundreds of deaths and injuries. Although his rule was more lenient than General Park’s, and he adopted many reforms, the Korean people became tired of military rule. Violent student demonstrations in 1987 forced President Chun to implement more social reforms and hold presidential elections in 1988.

1988 – 92: General Noh, Tae-woo, Chun’s chosen political successor, won the presidential election. The opposition party failed to field a single candidate, splitting the opposition vote and giving Noh a comfortable win. During his term, President Noh’s government established diplomatic relations with many non-capitalist countries, including the People’s Republic of China and the Soviet Union, both long-term allies of communist North Korea. The successful hosting of the 1988 Olympic Games brought Korea to the center stage of world recognition.

1992 – 1996: The election of President Kim, Young-sam ushered in a new era of civilian rule. Since taking office he worked hard to reform the widely criticized regulatory system through his “New Economy” and “Globalization” programs. The implementation of the real-name financial transaction act put an end to the easy hiding of hot money. Another 2,000 rules and regulations were abolished or amended during President Kim’s term. Despite the many contributions he made, Kim, Young-sam will probably be remembered most for the dismal economic situation the country was in when he left office.

1996 – present: The election of President Kim, marked the first time an opposition leader has been elected as president in Korea. After failing in four other attempts to win the popular vote, his party joined with the party of Kim, Jong-pil, and riding the population’s growing resentment towards the ruling party, gained the narrow majority needed to gain the presidency. His term immediately got off to the rocky start when the former ruling party boycotted the National Assembly session, which was to have confirmed President Kim’s choice of cabinet and prime minister candidates.

In what was termed “the trial of the century,” former Presidents Chun and Noh and several of their closest cronies were convicted in December 1996 for crimes committed after 1979. Chun received life imprisonment, while Noh was sentenced to 17 years in jail. President Kim, Dae-jung issued a special pardon for them a year later, in the name of national reconciliation.

Trying to create a more favorable environment for economic growth and foreign investment, the government has been liberalizing many of the existing economic policies. Korea joined the Organization for Economic Cooperation and Development (OECD) in 1996 as a full member. However, in order to sustain its development of the past decades, the country must proceed with structural adjustments, especially in its finance sector.

The establishment of the World Trade Organization (WTO) and membership in the OECD has increased outside pressure on Korea to open its domestic markets to competitors. Imports have risen, and a trade deficit of $20.6 billion occurred in 1996. Domestic manufacturers have gradually lost some of the market share they enjoyed under the protection provided by the government, and new opportunities for foreign companies have been created.

In November 1997, Korea became the third Asian nation after Thailand and Indonesia to become a ward of the International Monetary Fund (IMF) since August. It was a humiliating pill to swallow for a nation that had only joined the OECD the previous year. The IMF package ended up totaling close to $60 billion, by far the largest bailout ever by the organization. In exchange for the bailout, Korea must make several economic changes, which, while painful in the short term, should make Korea more competitive in the future. Despite numerous protests by private citizens for the government to renegotiate the terms of the bailout, the government appears to be sincere in its efforts to implement the reforms outlined by the IMF.

For the past several years, the won/dollar exchange rate was relatively stable, limited by an extremely narrow daily fluctuation band. The government lifted the daily fluctuation limits on foreign exchange trading and F/X rate watching has become a national pastime. At one point, the dollar-buying rates exceed 2,000 won. Since the IMF intervened and agreed to loan Korea over $57 billion, the won has traded between 1,400 and 1,800.