The island of Taiwan series continues with the second part of the Tatung trip below. Check out the rest of my “island of Taiwan” series on the Reach to Teach blog to find out more about this beautiful island. 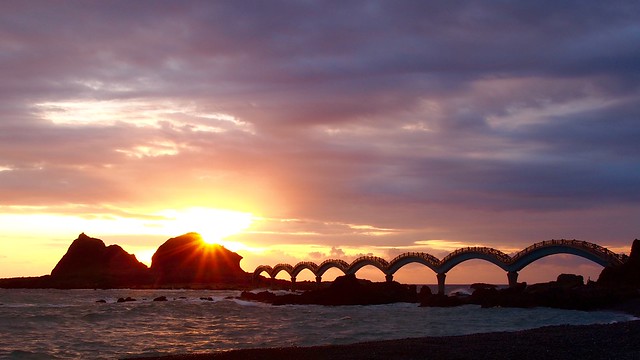 One of the best parts about traveling around Taiwan is about the people you meet along the way. In my opinion, the best way to get an authentic taste of Taiwan is to stay in hostels and backpacker inns: they’re inexpensive, comfortable, and full of diverse groups of people.

Since Taiwanese culture revolves around a strong sense of community hostels are a great place to meet people and connect with other like-minded travelers.

My roommate and I left the trimmed and groomed rice-paddies of Brunswick Avenue and made our way back to Taitung City. The trip was about an hour and a half by scooter and, in the dark with our high beams flashing, surrounded by water sources, we were the target for more than a few insects.

A word of advice for anyone riding a scooter in the countryside, in the dark, in Taiwan…wear covered clothing, a sleeveless cut-off shirt was not a wise choice. Also seeing that I was the only one capable of riding the scooter, I got the brunt of the insect barrage.

Finally, covered in what was, basically, an insect genocide on my body, we made it back to the hostel.

We walked into the hostel and were greeted with the top-notch service that most Taiwanese establishments are known for. The managers, a few pretty young Taiwanese men, and women asked us where we had come from, where we planned to go, and were more than gracious with their suggestions.

When we mentioned we wanted to see the sunrise at the famous Sanxiantai one of the managers mentioned that a guest was interested in doing just that, but was worried he didn’t have the willpower to go alone. Since we already planned to go, we were more than happy to add another to our group.

The upper floor of the hostel was where all the beds were located. It was the standard layout you can find in many hostels – bunk beds pushed close to each other to fit as many people as possible into one place. The bathrooms and showers were located outside on a large outdoor portion of the building used like a deck for hanging clothes or growing plants.

The man interested in going to see the sunrise was a young Taiwanese guy in his early twenties. He was taking his summer break from university to travel around the entirety of Taiwan – on his amazingly sexy motorcycle nonetheless.

When we asked how his trip had been so far he told us, “It will be hard to go back to regular life.” We then agreed on waking up at 3:30am to drive to Sanxiantai to watch the sunrise.

“It will be hard to go back to regular life.” Taiwan leaves this impression on so many of its inhabitants, both permanent or temporary.

The hour and a half ride from Taitung City to Sanxiantai, earlier than the crack of dawn, was completely worth it.

The name Sanxiantai translates to the Terrace of the Three Immortals, so called because of the story that says three immortals once took a rest in this area and their footprints are the three rocks located in Sanxiantai.

See also  Why We Travel, A Short Travel Documentary by Heather Richards

The sunset rose of these immortals’ footprints, cast its rays over the shore and reflected off the rocks that create the shoreline.

Even though a line of photographers, with tripods in tow, and DSLRs at the ready, created a meandering line just off the coast, we felt as though we were the only ones there, that the sunset had been waiting for us to arrive just before greeting everyone else, as well.

As the sun rose further into the sky and the photographers started to disperse, we got out bathing suits ready for what we had believed would be a relaxing swim in the crystal clear aquamarine-colored water…we were at least right about the swimming. The water was aggressively lapping against the large rocks pointing out of the water, crashing and splashing us all with sea water.

The water was aggressively lapping against the large rocks pointing out of the water, crashing and splashing us all with sea water.

“Maybe it will be calmer as we go further out,” all three of us thought. Nope. When all was said and done, my roommate was down a pair of glasses and we were getting ready to move onto our next destination without his second pair of eyes. Good thing buying contacts is amusingly simple in Taiwan!

Have you ever been on a trip to Taitung? What were your experiences and adventures like along the way? Would you have done it any different? Let us know in the comments section below.