Mary McCusker is currently teaching for EPIK in South Korea through Reach to Teach. She has kindly shared with us her experiences and pictures in an interview. She had so much to say about her experiences that we have made this into a two part interview.

1) Please tell us a little about yourself. 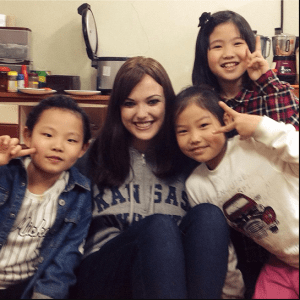 My name is Mary McCusker, and I’m from New Jersey, USA. And, before you ask – no, I bear no resemblance to the folks from the abomination of the “reality” television show, Jersey Shore. I’m 23 years old, and I’ve been living in Gwangju, Korea, for the past six months teaching at two different middle schools.

I was lucky enough to land a rewarding, well-paying position right after college graduation. Working in an enjoyable job, reveling in the vibrant city life of Philadelphia and living near the sun-drenched sand and surf of Brigantine Beach, New Jersey, it seemed like a very tempting option to settle into comfortable and conventional pursuits.

But in my heart of hearts, I knew that I wasn’t quite ready to dismiss my wanderlust and desire to travel, teach, and truly immerse myself in a different culture. Still, I was apprehensive about leaving family, friends and all that was familiar to me for a faraway land.

As I sat, pen in hand reading over the EPIK contract, my parents – who spent the better half of their 20’s in the Peace Corps traveling all over the world teaching English, empathized with the cold feet I had. They told me, “There will never be a perfect time to do this, but I don’t think you’ll ever find a better time.”

Deep down, I knew I wasn’t quite ready to spend my early 20’s at a desk job (not that I judge those who do – to each his own!). I’m a firm believer in that old adage: “Life begins at the end of your comfort zone.”

So, I packed my bags, and in February 2015, I was on an airplane with my face pressed against the window, watching the lights of New York City fade away, en-route to Incheon Airport. It was the best decision I’ve ever made.

2. How have you enjoyed teaching in South Korea to date?

I would be lying if I said that there haven’t been times when I found myself with my head buried in my hands between classes, thinking, “I have no idea what I’m doing.” I lose my voice at least once a week. Lesson planning sometimes spills into the weekend. There were surely moments when I doubted myself and my abilities.

But even at my (very few) low points, there was never once a single moment when I even considering that moving to Korea was a mistake. It can be hard work, but what job isn’t? That said, I absolutely love my job and I have enjoyed teaching in Korea very much, as have the majority of my EPIK friends.

We all know that Korea, along with countless other countries, believe that developing a firm command of the English language is extraordinarily beneficial, regardless of one’s field of work. Helping students progress in learning English is incredibly rewarding.

I spend a fair amount of time planning lessons that hopefully captivate the students’ interest in a fun and informational way. Sometimes, I am looking at a room of 30 students with blank stares (and maybe a couple sleeping ones), but most of the time, the students are interested, eager, and engaged.

Sometimes, they don’t want to leave the classroom even after the bell rings. Those are the days that I treasure.

Left: Some of my middle school students playing after class. Right: Elementary school students from my apartment building – they were scared of me at first, but eventually wanted their picture taken!

3) What advice can you give to new teachers? 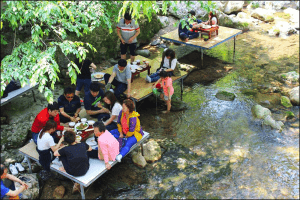 While my commentary is primarily about teaching in Korea, I suspect that much of what I say here is applicable to many other countries where Reach to Teach applicants are placed. First and foremost, there is a wealth of resources for foreign teachers – take full advantage of them.

Sign up for a free account on www.WayGook.org to access lesson plans and games, organized by category and/or textbook. Join the Facebook groups for native English teachers in your region. Talk to other ex-pats and listen to them. Most will be more than willing to assist you in any way possible, as they were once in your situation.

Talk to your co-teachers as well, even though it may be a bit challenging at times given the language barrier. Ask them for suggestions and feedback. Although sometimes they may not be as straightforward as you would like, they will appreciate the gesture and your willingness to seek their advice.

Secondly, it’s important to recognize that most students will be very shy when it comes to speaking English in front of a native-English speaker. And can you blame them? Speaking a different language – especially two languages as vastly different as English and Korean – can be daunting.

Let them know that you will be understanding and that you would rather them raise their hand and make a mistake than not raise their hand at all. Be kind to them – they feel an academic pressure that Westerners cannot begin to comprehend. Compliment and praise them for their efforts. Bring candy once in a while. Show them that you care about each and every one of them.

But don’t be a pushover. There will be trouble-makers, as there are in every classroom in every country in the world. Your co-teacher will likely handle the majority of the classroom behavioral issues, but don’t hesitate to punish unruly conduct.

Confiscate the God-awful, out-of-tune recorders they keep playing during class. (I would love to have a little chat with whoever thought that it was a good idea to give those instruments to middle schoolers!) Make them stand in the back of the room. Raise your voice if necessary. Don’t be afraid to be strict.

Lastly, and perhaps most importantly, be flexible and be patient. As I mentioned earlier, you will have days of doubt and frustration, but fight those feelings with adaptability. Click To Tweet If your teaching routine doesn’t seem to be working, try a new one. If that one doesn’t work, try another. With enough pluck and determination, you will find an effective way to teach – I guarantee it.

4) What was your experience like with Reach to Teach?

Reach to Teach – where would I be without them? Probably still in New Jersey buried in a two-foot pile of paperwork. I will sing the praises of Reach to Teach as long as I live. Moving to a new country to work, as you can imagine, is not exactly a simple process. Reach to Teach is very aware of this, as many of their workers were once foreign teachers themselves.

The requirements of the Korean Ministry of Education, which included a 70-page application, countless documents, notarizations, recommendation letters, near-immaculate formatting, fingerprinting, VISA applications, photographs, background checks, essays… while all absolutely necessary, might have totally overwhelmed me had it not been for the patience, guidance, advice, instruction, and help of Reach to Teach.

They even gave their applicants a mock interview to help prepare for what would have been an extremely nerve-racking online video interview with EPIK (English Program in Korea) officials.

Reach to Teach guided me, with the utmost patience and professionalism, through every step of the way – free of charge. John Kellenberger’s dedication and expertise will never be forgotten by those who used Reach to Teach

5) What was a unique moment in the classroom? 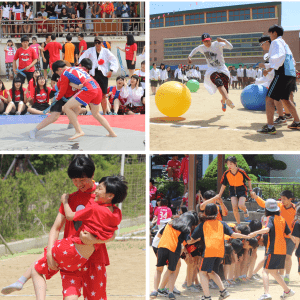 Well, saying that there has never been a dull moment in my classroom is an understatement. Half of these moments are inappropriate, as students love to repeat what they hear from Western uncensored rap songs and R-rated movies.

There are countless hilarious exchanges and student one-liners that I’ve experienced in the past six months, and I could write a novel on them, but if I had to share one unique moment that truly crystallized the fact that I wasn’t in Kansas anymore, it would probably be the following:

It was almost 90 degrees outside (plus unbearable humidity) and I was sweating Ted Striker from Airplane. Being accustomed to an ocean breeze in the heat of the summer all my life, I don’t exactly handle the hot weather in Korea too well…but I digress.

For some incomprehensible reason, the students insisted that the air conditioning remain off and that I open the windows instead. So I did, and resumed teaching, wiping the sweat off my face every 30 seconds. There is a luscious garden outside of my classroom, but with luscious gardens come gargantuan, grotesque wasps which I frequently hear buzzing outside of the windows…which were now wide open.

My worst fear came true, and within minutes, two of the aforementioned wasps came zooming into the classroom, circling the students (and my face). So naturally, I dropped my chalk in a panic, grabbed my English-Korean dictionary, and chased these menacing intruders around the room – bumping into students, knocking over chairs, thinking, “No one is getting stung in my classroom!”

After causing quite a scene, I paused for a moment to catch my breath and looked around the classroom to see a sea of slightly confused, shockingly unfazed faces, staring at me. One of the wasps actually landed on a student’s desk just inches away from her, and she smiled, looked up and me, and said, “Teacher, let it be”.

Unsure whether or not to laugh at the unintentional pun or continue my frantic chase, the wasps miraculously showed some mercy and zoomed out of the classroom. Immediately, I slammed every window shut. But the heat problem still remained, so I turned on the switch to all six ceiling fans. Big mistake.

The second the first blade started turning, chaos erupted. Every student leapt from their seats, some darting out of the classroom (and knocking each other over in the process), others screaming in Korean, the rest fighting their way to the fan switch – jumping over desks, chairs, and each other.

Within a few seconds, someone made it to the switch and turned it off). It took about ten minutes to coax the students back into the classroom and return to their seats (although some of them had fled the scene entirely).

Do you have any hilarious tales of your time teaching in South Korea? How was your time spent there? Let us know the highs and lows of your experience teaching English in Korea. Stay tuned for part 2 of this interview.